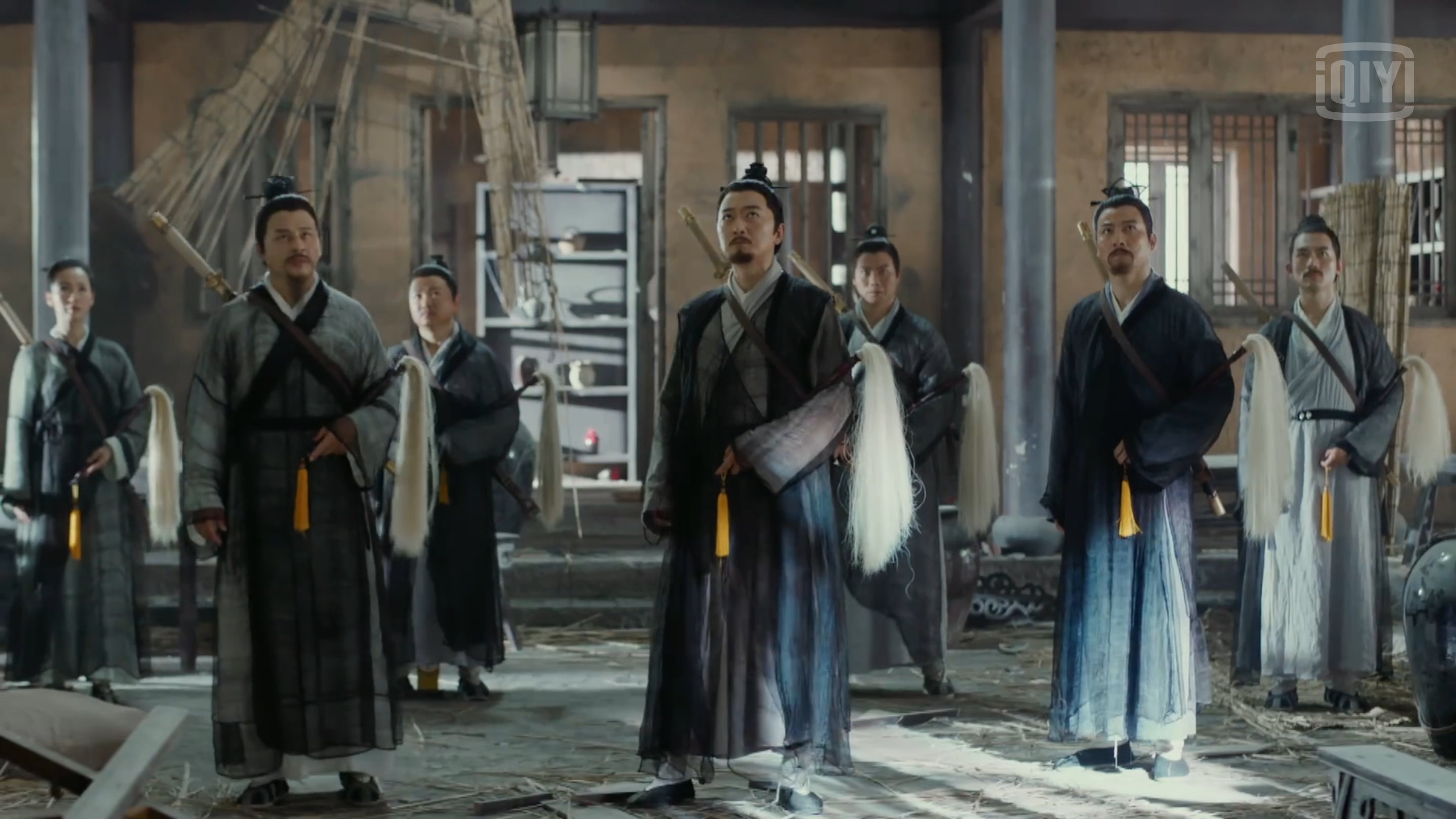 Or, Trouble with the In-laws

When we last left Lotus and Guo Jing, Guo Jing had promised to stay on Peach Blossom Island forever, devoting himself to his love. I’m sure everything will be fine for them from now on, right?

Lotus dances around a little, showing off as she throws her sleeves around, knocking leaves and petals off the surrounding trees. It’s wonderful imagery and reminds me of scenes in House of Flying Daggers and Hero.

She notices something amiss and runs off, with Guo Jing close behind. On the beach, they find Wind Chaser, third shifu Ryder Han’s beloved steed. The horse is dead, in a manner that seems to implicate Apothecary Huang. Lotus can see Guo Jing’s mind working, coming to the inevitable conclusion and she warns him to be careful, and not act until they know what actually happened.

They follow a trail of footprints into the island until they reach the headstone that marks the burial mound for Lotus’ mother. The gravestone is ajar, leaving the opening to the crypt open. They go inside, only to find sixth shifu Gilden Quan’s weapon, the iron weapon snapped in half. Again, the only person on the island with the power to do this would be Lord Huang.

Within the center of the crypt, around Lotus’ mother’s casket, they find a truly grisly scene. Gilden Quan is dead, impaled on the other half of his own weapon. Second shifu Zhu Cong is dead, his pockets filled with jewels that appear to have been taken from the burial mound. Ryder Han is also found dead, his wound the five holes that are the signature of the nine yin skeleton claw technique. Next to Ryder Han is Jade Han, the youngest freak. She too, is dead, appearing to have taken her own life by cutting her own neck. Before she dies, she draws a cross in her own blood.

Lotus is shocked by the horror, but Guo Jing seethes with rage and the need to exact vengeance for his shifus. Lotus tries to calm him down but he simply ignores her. He can’t stand to look at her, instead focusing on his dead masters.

They find their way to the main house, trying to find Lord Huang, and there they also find bedlam. The house is a mess and it doesn’t look like anyone has been there in a while. There is no sign of the Lord of the island. They find a letter addressed to Lord Huang, written by the Seven Freaks, which warns Lord Huang of nefarious efforts to drive him to battle the Quanzhen Sect. Despite sending the letter, the Freaks felt the need to come in person, and Guo Jing concludes that Lord Huang attacked his masters.

Lotus is horrified and also puzzled. The scene does not make sense to him, but she can’t break through to Guo Jing.

Guo Jing buries his masters, giving them the respect they deserve. Lotus tries to help and he pushes her away. Lotus notices that Zhu Cong has jewels in his pockets that do not belong to her mother, so they did not come from inside the crypt. Guo Jing doesn’t want to hear any of this.

The next day they find Woodcutter Nan. Nan is still alive, but appears to be crazed. He attacks Guo Jing, and his face is locked in a gruesome smile. Nan can’t speak, and he tries to write something out, but then he dies before he can finish. Guo Jing assumes Nan was trying to draw ‘east’, to implicate Lord Huang.

Guo Jing makes for the beach and Lotus leads the way for him. The two do not talk, despite Lotus’ efforts to draw Guo Jing out. They discover a set of Lord Huang’s green robes. A section of the fabric is torn off, exactly matching the piece that had been tied to the leg of their condor. Guo Jing jumps into the water and swims to a boat, and sets off for the mainland, without saying anything or even looking at Lotus.

After reaching land, Guo Jing makes for Jiaxing and the Garden of the Eight Drunken Immortals. It is almost time for the Moon Festival and the people he is looking for will be there for the martial contest.

He arrives at the tavern and finds Eternal Spring Qiu Chuji on the second floor, sitting at a table laid out with a feast for many people. Qiu Chuji recaps the beginning of the story for us, until Guo Jing can bear it no longer and tells him that his shifus are dead.

Just then, Apothecary Huang enters the room! Guo Jing doesn’t hesitate, he launches a killing strike. Lord Huang deflects and Guo Jing’s strike destroys the tavern, collapsing Guo Jing down to the first floor. Lord Huang and Qiu Chuji take off, and Guo Jing follows until he catches up to them at the Tower of Mist and Rain.

Inside the tower, Lord Huang battles against the Quanzhen Sect as well as Ke Zhen’e who is standing in on of the positions of the Heavenly Northern Dipper Formation. But Ke is not familiar with the technique, so their strength is not what it should be.

Guo Jing also finds Count Seven Hong, eating a leg of mutton and watching the battle. He’s been using the new information from the Nine Yin Manual, and his kung fu is a little better, but he’s still in no condition to fight.

Guo Jing leaps into the battle to turn the tide. No one is really excited to see him. The Quanzhen Sect all assume that he will support his father-in-law, and Lord Huang assumes he will join Ke Zhen’e to support the Quanzhen. Guo Jing joins the Heavenly Northern Dipper Formation and because of his epiphany at the Beggar’s convention, he strengthens their formation.

The Quanzhen are fighting Lord Huang because they believe Huang killed Zhou Botong. In a moment of clarity, he realizes that he must tell them all the truth. This turns down the intensity of the fight a little, as the Quanzhen are now willing to back off.

But Guo Jing is still convinced that Lord Huang killed his masters. Huang says he left the masters on his island, enjoying themselves. Guo Jing tells everyone that his masters are dead, and Lord Huang must have done it.

Lord Huang (I guess he wants to live up to his reputation?) decides that if that’s what everyone wants to believe, he’s just going to own it, even if he didn’t do it.

Lotus shows up! She begs her father not to take responsibility for the deaths of the Freaks, since she knows he couldn’t have done it.

Everyone fights. And no one listens. *sigh*

Even the Venom shows up. (shrug?)

Lotus finally begs Count Seven to use his sway with the other masters to stop fighting.

He does! Something useful out of this guy for once! He even manages to fake his healed kung fu enough to put some worry into the Venom. (fake it till you make it!)

Count Seven manages to talk everyone down. Kind of. Everyone at least agrees to wait until tomorrow before trying to kill each other again. So, not much of a victory.

Just then, the sound of boats and drums. Someone important is coming!

(Who’s left? Nearly everyone is here. I guess we’ll have to wait until next week to find out.)