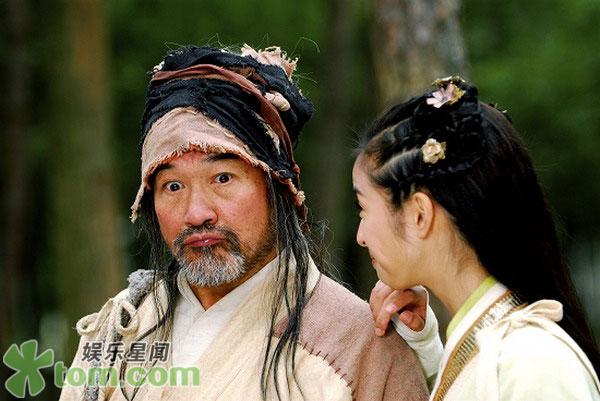 Or, Even Martial Masters Can be Complete Idiots

Another catch-up chapter as Lotus and Guo Jing finally rejoin Hoary Urchin Zhou Botong and Count Seven Hong, and discover what their martial masters have been up to. Plus, Lotus and Guo Jing’s romance brings them even more trouble.

Lama Supreme wisdom’s cohorts surround them, Tiger Peng, Hector Sha, Browbeater Hou, and Graybeard Liang. While Zhou and Supreme Wisdom are locked in battle the other four men are hectoring someone in a nearby cave. First Freak Ke Zhen’e is inside!

Hearing his shifu’s voice, Guo Jing jumps into action, leaping into the middle of the four men. He and Lotus make quick work of the four men, defeating them roundly with their newly improved kung fu. Tiger Peng buys freedom for himself and his friends by reminding Guo Jing about their bet to fight on the day of the Moon Festival. Since it hasn’t arrived yet, Guo Jing cannot hurt him.

*sigh* This works. Guo Jing lets the men go. Before they go they confirm that Zhou and Supreme Wisdom are in a bet to see who moves first. In fact, neither man so much as moved a muscle during the fight.

Ever impatient, Lotus decides to speed up the staring contest by poking each man equally with her qi, at a soft point under the ribs. Hoary Urchin eventually moves, unable to keep from laughing but then they discover that Supreme Wisdom cheated by having his friends lock all of his acupressure points to keep him immobile.

Now that they know Hoary Urchin is ok, Guo Jing goes into the cave and comes out with both Ke Zhen’e and Count Seven Hong. When Ke Zhen’e hears Lotus’ voice he launches an unexpected, lethal attack on her.

Caught off guard, Lotus is unable to defend herself but Guo Jing is closer and acts on instinct, moving to deflect Ke Zhen’e’s strike. Not knowing how much his kung fu has improved, Guo Jing’s move blasts his shifu back, bloodying his face and knocking out two teeth. Guo Jing is horrified at his own actions and begs forgiveness.

Well, it turns out that Ke Zhen’e is distraught over the fact that Guo Jing is paired with Lotus and apparently on his way to Peach Blossom Island. He cannot reconcile that Guo Jing will call two rivals master. In order to make things right with the Freaks, Ke Zhen’e demands that Guo Jing bring him the heads of both Apothecary Huang and Lotus.

Hoary Urchin takes off around now also, fleeing for his life at Lotus’ mention of Madam Ying.

Count Seven promises to try to make peace with the Seven Freaks on behalf of Lotus and Guo Jing. He catches them up on his adventures since they parted, which consist mainly of hiding out in the Imperial Palace and sneaking food from the kitchens. Lotus and Guo Jing tell Count Seven about their meeting with King Duan and how they learned the rest of the Nine Yin Manual and the key to restoring Count Seven’s kung fu.