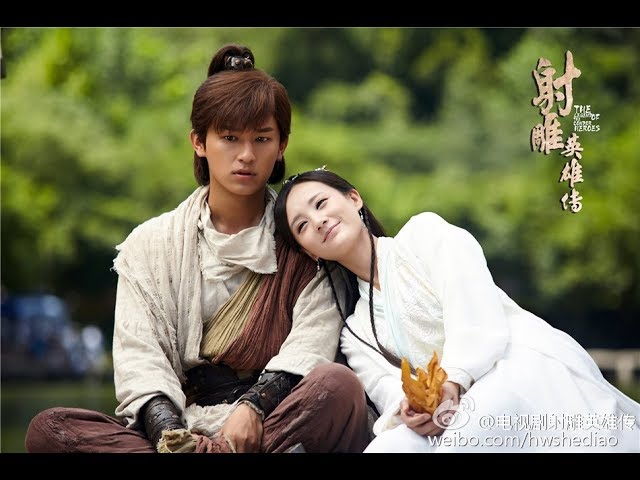 Or, Everyone Jumps Back into the Pool
Also, You Know Things are Bad When the Reasonable One is Freaking. Lotus.

When last we left our motley, arguing crew, someone was approaching the Tower of Mist and Rain from the water.

Pretty much everyone else from the ensemble disembarks as the boats come ashore. Wanyan Honglie, Tiger Peng, Hector Sha, Graybeard Liang, Lama Supreme Wisdom, and Qiu Qianren (the real one.)

Pretty much everyone else from the ensemble disembarks as the boats come ashore. Wanyan Honglie, Tiger Peng, Hector Sha, Graybeard Liang, Lama Supreme Wisdom, and Qiu Qianren (the real one.)

The Viper sees his chance. Here’s his opportunity to eliminate the Quanzhen Sect once and for all. He notes that it is now past midnight, therefore the fifteenth day, and the day of the contest. Count Seven has promised not to interfere. If he can defeat the Taoists before Hoary Urchin shows up, he will be rid of the Quanzhen Sect. Viper leaps in front of the monks and lets loose with his deadliest kung fu.

Meanwhile, Guo Jing is still stewing, thinking on how he might attack Lord Huang. To distract him, Lotus prods Guo Jing about not avenging his father’s death, goading him into attacking Wanyan Honglie.

Guo Jing makes up his mind and launches himself at Wanyan Honglie. He carves through the Jin prince’s martial masters like a cleaver through sodden tofu, barely spending any breath on them. At the last moment Qiu Qianren intervenes, blocking Guo Jing from reaching his target.

With Wanyan Honglie protected, the martial masters set their sights on Ke Zhen’e. The remaining Freak is outmatched without the support of his martial brothers and sister, and he is soon overcome. Lotus leaps to his aid, then leaves him under the care of her father while she goes to support Guo Jing in his fight against Qiu Qianren.

Mists roll in around the tower and soon everyone is nearly fighting blind. Hoary Urchin shows up and everyone is astounded that he’s alive. He gets into a fight with Lord Huang, even though the Quanzhen Sect were hoping he would help them against Viper Ouyang. Lotus extorts Hoary Urchin into fighting against Viper by threatening to tell everyone about his history with Madame Yang. Guo Jing takes advantage of the lull in the fight to get Count Seven and Ke Zhen’e to safety inside the tower.

Out of the shrouding mists, comes the sound of a herd of snakes. Everyone runs up the tower to escape the snakes. Arrows begin to rain down on them, and we discover that Wanyan Honglie has sprung his trap. His soldiers are on the water pelting them with arrows, while Viper Ouyang keeps them pinned in the tower with his snakes.

All looks lost until Ke Zhen’e leads everyone away from the tower based on his knowledge of the land from his previous time here. He knows the paths by feel, so is unencumbered by the mist and darkness. He leads everyone through a path that has no snakes.

The Quanzhen Sect go off to fight the soldiers. Ke Zhen’e hobbles away on his own. Apothecary Huang and Count Seven wander off to find a bar.

(Oh, and Hoary Urchin was left on top of the tower because he was too scared to walk through the snakes.)

Guo Jing loses track of Ke Zhen’e, but Lotus has been keeping tabs and she saves him from the encroaching soldiers. (Oh yes, here they are again.) In the confusion Ke Zhen’e takes an arrow to the leg. Lotus defeats the soldiers and drags Ke Zhen’e off the field of battle.

Despite Ke Zhen’e declaring their feud over, Lotus insists on staying with him. Lotus captures two enemy soldiers and bullies them into carrying Ke Zhen’e on a litter. In this way they make their way to shelter for the night. Lotus cleans and dresses Ke Zhen’e’s wound, making the Freak question what Lotus has in store for him.

They eventually make it to Iron Spear Temple. Lotus finds the aforementioned spear and turns it into a walking stick for Ke Zhen’e. They bed down for the night and…get this…Ke Zhen’e actually gets up in the dark with his new walking stick and considers killing Lotus.

What an ungrateful little–!

Luckily Viper Ouyang shows up and wakes Lotus up. Ke Zhen’e and Lotus hide behind a statue. And of course, it’s all the bad guys who’ve also decided to spend the night here. Wanyan Honglie, Wanyan Kang, Viper Ouyang, and all the mediocre martial masters. Even Tempest Qu’s daughter is with them.

After hiding and listening for sometime, Lotus uses her finger to silently write in Ke Zhen’e’s palm, telling him to tell her father who kills her. She then steps out of hiding.

What follows is Lotus being clever with her words, and getting the true story of what happened on Peach Blossom Island, first by questioning Tempest Qu’s daughter, and then verbally sparring with Viper when he realizes that she’s figured it out.

It turns out that Viper and Yang Kang were on the island and they ambushed the Seven Freaks, purposely leaving Ke Zhen’e alive to spread the lie that his brothers and sister will killed by Lord Huang.

Lotus surmised this from clues she had found on the island, but she wants Ke Zhen’e to hear the proof from Viper himself.  Even Viper is impressed with Lotus’ quick intelligence.

And I was duly impressed that in this entire chapter, Lotus was the only one using her head at all!