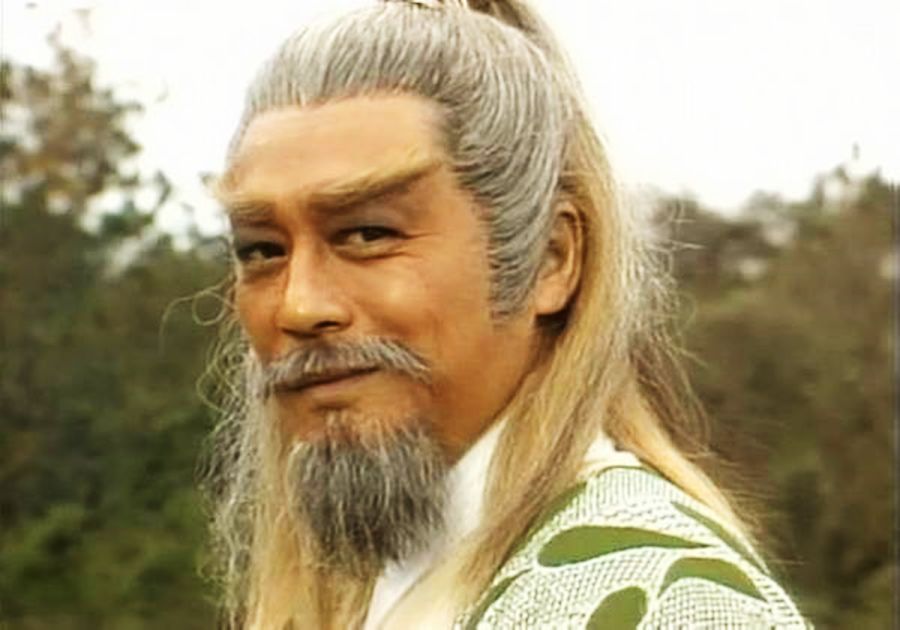 Or, Story Time!
Or, Don’t Get on Lotus’ Bad Side

This chapter fills in some blanks and backstory for us as Lotus and Guo King continue on their journey. Lotus frets over Guo Jing’s imminent separation from her.

Mercy Mu, having warned our lovebirds about the Iron Palm Gang’s trap, now recounts to them what happened with Yang Kang. Remember, Lotus and Guo Jing were hiding in the secret room at the inn when Wanyan Honglie and his band of bros were trying to find the writings of Yue Fei. So they saw Yang Kang leave with the beggars and Mercy.

Unfortunately, Yang Kang is still the cad he’s been for the whole series, singularly focused on getting inside Mercy’s robes.

Mercy, however, thinks that with leadership of the Beggar Clan, he will finally become the man she knows is inside him. (way, way, way deep inside him)

We saw how the meeting of the beggars went, so Yang Kang, seeing how the wind was blowing, skipped out early, taking Mercy with him to Iron Palm Mountain.

There he meets with Qiu Qianzhang (or is it Qiu Qianren?) who gives him herbs he can use to roofie Mercy. Ugh.

Luckily Mercy happens to spy this little exchange. Furious, she falls upon Kang’s guest as he leaves and she beats him senseless. (so it’s Qiu Qianzhang!) Then she goes in to confront Kang, still hopping mad and they fight and…

…they do the deed.

*sigh* I don’t know how I feel about any of these people any more.

Now that he’s reached the promised land, Kang feels no need to be coy (lol) anymore. He lays out his grand plans to help the Jin overthrow the rest of the Song empire.

Finally, finally, this is the straw that breaks the overburdened camel’s back. Thank the gods something put that poor animal out of its misery. Mercy runs away, hides in a nunnery for a while, and then ventures back out just in time to run into Lotus and Guo Jing.

Lotus wants Mercy to join them on their journey, but Mercy is too wracked with self-loathing to do so. She leaves, but before she does, she gives Guo Jing a book she picked up on Iron Palm Mountain. I wonder if there’s anything important in it?

Despite Mercy’s warning, Lotus chooses to continue with plans to board the Iron Palm boat. She figures she and Guo Jing are capable enough to deal with whatever comes their way.

While they are traveling down the river, Lotus reads the volume Mercy gave them. It is a history of the Iron Palm Gang, written by Shengguan Jiannan, the leader of the gang prior to Qiu Qianren. Shengguan was a patriot and follower of Yue Fei. After Yue Fei’s fall from power, many of his followers roamed the countryside, doing what they could to repel the Jin.

Shangguan joined the Iron Palm Gang while doing this and eventually was named as its next leader. As leader he encouraged the gang members to be moral and act in ways that were good for China.

Eventually Shangguan hears of Yue Fei’s final writings and he leads his Iron Palm Gang to the Imperial Palace and they steal the book from the hiding place behind the waterfall. After stealing it, they realize that Yue Fei may have left it there intentionally, hoping that a specific person would find them. So they go back to the palace and the hiding place behind the waterfall, and put in the painting with the poem that Lotus and Guo Jing found in Tempest’s secret room. In this way would the true inheritor of Yue Fei’s wisdom know to come to Iron Palm Mountain to find the General’s last work.

When Shangguan died, he passed leadership of the gang to Qiu Qianren. But knowing that Qiu had no desire to attain the higher morals and ideals that Shangguan adhered to, Shangguan simply took Yue Fei’s writings with him to the forbidden caves when he was going to die. And this of course is where Guo Jing and Lotus found them.

Well, Lotus and Guo Jing just jump over to the new ship as well. (Terrible plan!)

A fantastic fight breaks out between Guo Jing and Lotus and Qiu Qianren. The two kids are just about holding their own when Madam Ying comes out from one of the rooms on the deck. (Why is she here?)

(Why did Qiu Qianren want to kill her son?)

Madam Ying goes mad, attacking Qiu with all her strength and prowess. For all his skill, he simply can’t beat someone who has gone mad and has no interest in their own self-preservation. He jumps off the boat and the current sweeps him downstream.

Lotus and Guo Jing ride Ulaan to the next town. They’re in good spirits, and still on track to check on Lotus’ father, find Count Seven to help him heal, and then travel to Jiaxing for the martial contest with Tiger Peng et al.

Lotus, however, isn’t doing great. She’s dreading the coming day when Guo Jing will leave her to return to Mongolia. So she tries to squeeze as much fun into each day with him as possible.

This is not an optimal situation for, like, anyone other than Lotus and Guo Jing.

That night Lotus decides they will go out for dinner. They cross town until they find a house hosting a grand party. Lotus sneaks in through the back door and Guo Jing just follows along out of habit. Once inside, Lotus unleashes her kung fu on the unsuspecting diners, laying waste to the men guarding the household.

She and Guo Jing then proceed to have a feast at the host’s expense, eating his food and toying with his guests. Guo Jing goes along with this but after they leave he (finally) expresses some reservation about doing this.

One wonders why he waited until after dinner to broach the topic.

Lotus pours her heart out. She’s distraught that Guo Jing is leaving her, and she wants to have as much fun as possible before they go separate ways. Guo Jing is gobsmacked, and obviously, a complete idiot for not realizing that Lotus would be torn up about this. He breaks down and commits to staying with her forever, forsaking his vows to the Mongols.