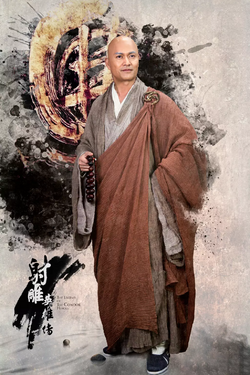 Or, Lotus and Guo Jing Get a History Lesson

Firstly, let me apologize for the lapse in posting. Life has a way of getting away from you, and the last month has been on the more hectic side of things. But we’re back to mostly normal now, and ready to get into the homestretch and finish out Legend of the Condor Heroes! On with the next chapter…

Lotus and Guo Jing are only one guardian away from King Duan, who may be Lotus’ only hope for survival! Who is the last guardian, the scholar, and what challenges will he pose to our heroes?

Lotus and Guo Jing find themselves at the foot of a narrow stone footbridge that spans a valley shrouded in mist. Guo Jing carries Lotus on his back and begins to run across the bridge. The bridge is broken at several points, forcing him to jump over.

(What exactly is holding up this bridge? It’s described like an arch of stone, but how can that kind of bridge have gaps?)

Eventually they come upon a large gap that will be difficult to jump, and the last guardian, the scholar, is seated at the far end of the gap! The scholar ignores Guo Jing’s request for an audience with their master, instead reading aloud from the Analects of Confucius.

Lotus flexes her knowledge again, challenging the scholar to a battle of wits. Of course, Lotus’ education from her father has more than prepared her to match wits with the scholar. She easily answers the scholar’s three questions, earning them passage to the end of the bridge. The scholar leads them to a temple where they are told to wait for shifu’s arrival.

While they wait, Guo Jing finally remembers to open the last note from Madam Ying. The last message is actually a drawing that neither he nor Lotus understand. The drawing depicts a man who has cut a piece of his own flesh off, and the flesh hangs on a scale with a dove on the opposing side of the scale.

Lotus and Guo Jing are finally taken to meet King Duan, who is variously present, and yet has also departed the world, according to his disciples. They meet two men dressed as monks and Lotus immediately recognizes which one must be King Duan. She pulls Guo Jing over and they both kneel at the master’s feet.

King Duan is delighted to receive his guests, and it is revealed that when King Duan secluded himself, he renounced his worldly claims and was reborn as Reverend Sole Light. Sole Light’s kung fu is powerful, shown by a simple test he performs on Guo Jing. Guo Jing is immediately humbled by Sole Light’s strength.

Sole Light discerns Lotus’ predicament and vows to heal her.

In discussing their journey to meet with Sole Light, Lotus and Guo Jing tell him about Madm Ying. Sole Light determines that the three notes they were given were actually two written by Madam Ying, and the third note, the drawing, was actually drawn by Viper Ouyang. Somehow, all of this is tied again to the Nine Yin Manual.

Against his disciples’ protests, Sole Light begins the lengthy process of healing Lotus. The healing process is a complex, drawn out series of acupressure strikes. Guo Jing watches in amazement at Sole Light’s prowess. At the end of the process Sole Light’s disciples again try to intervene but Guo Jing prevents them. Sole Light finishes and Lotus is weak, but healed.

Sole Light is also drained, as he healed Lotus by injecting his own qi into her. In fact, the very skills he used are a combination of his Yang in Ascendance, coupled with Cosmos neigong. The combination is unknown by anyone else. But the immense drain on his energy means Sole Light will need to recuperate for five years before he is able to return to his strength. Beyond grateful, Lotus offers the master her supply of Dew of Nine Flowers pills to help him recuperate. He takes the pills but then shortly collapses. He has been poisoned!

After questioning Lotus about where she got the pills, Lotus determines that Madam Ying had the pills briefly during their visit to her home. She must have switched some of the pills with poison, hoping to poison Sole Light!

The master’s disciples are more circumspect, believing that Lotus and Guo Jing are accomplices to the deception, and that they are here solely to harm their master.

There’s definitely something going on in the backstories of Sole Light, Viper Ouyang, and Madam Ying. But as usual, someone isn’t being forthcoming with the story…

Lotus and Guo Jing retire to rest, but are soon interrupted by Sole Light’s disciples. They are sure our heroes were sent to kill their master.

Unfortunately Viper heard of this and immediately moved to trap King Duan by injuring one of his disciples, forcing him to heal them and bind his own power for five years. This is why King Duan secluded himself, and what his disciples believe Lotus and Guo Jing are here for.

The disciples accuse Lotus and Guo Jing of leading Sole Light’s enemies to their temple because a message with a jade bracelet has just arrived.

(How did it get there? Lotus and Guo Jing had such a hard time getting there but the Uber driver just rolled up to the front door?)

We finally get everyone back together with Sole Light, and he gives the kids the rest of the story. Remember who was with Immortal Double Sun when he went to train with King Duan? Zhou Botong, the Hoary Urchin! Well, apparently the Hoary Urchin got himself into some kind of trouble while Double Sun and King Duan trained. But what did he do? Well, you’ll have to come back next week to find out…

King Duan was a real person!