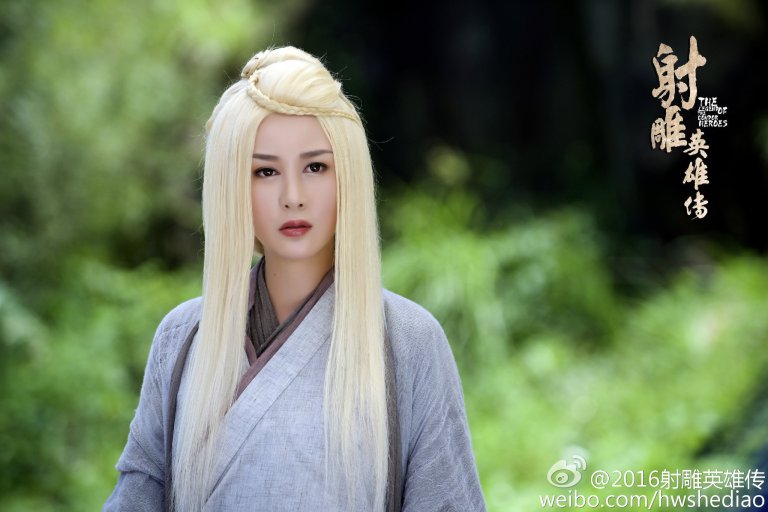 Or, Lotus is a Hopeless Show-off

Hello friends, we have reached A Heart Divided, the fourth and final chapter in Legends of the Condor Heroes. If you’re just joining us, the read-along started way back in book one, A Hero Born. All the chapter write ups can be found here on my blog or in our Facebook group.

At the end of the third book, A Snake Lies Waiting, Lotus and Guo Jing had just escaped the Iron Palm Gang by the skin of their teeth, but Lotus had taken a direct hit from Qiu Qianren (the real one) and was gravely injured. They fled the mountains on the backs of their condors, uncertain as to where to go next.

The condors are large and strong, but unaccustomed to carrying an entire person. Eventually the birds have to land and set Guo Jing and Lotus down in a dark forest. Lotus is not doing well and Guo Jing doesn’t know what to do. He picks her up and begins trudging through the pitch black wilderness until he sees a light up ahead. He follows the light back and forth until he realizes that it’s just getting him more and more lost.

Luckily, even half awake, Lotus has recognized that the forest is a maze laid out similarly to her father’s residence on Peach Blossom Island. She gives Guo Jing directions and they soon arrive at a clearing that contains two primitive huts, surrounded by a mire of black mud. The mud sucks at Guo Jing’s feet, but Lotus again comes to his rescue, somehow knowing the exact path through the mud that allows them to cross safely.

Once inside the hut they find a white-haired woman engrossed in a math problem laid out in counting rods.

(I didn’t know about counting rods, so here’s a wiki link:

Also, here’s the scene where Guo Jing and Lotus enter the hut:

Even as beat up as she is, and with barely any energy to spare, Lotus still has the chutzpah to look over the woman’s math problem, work it out in her head, and blurt out the answer before the other woman can finish. The white-haired woman resets the counting rods to calculate the cube root of 34,012,224 (wow) and again Lotus does the mental math faster.

The white-haired woman is actually quite young, but her hair is white and brittle. She is Supreme Reckoner Madam Ying (Divine Mathematician in the Chinese text) and apparently she is not quite the math whiz that her title makes her out to be, what with Lotus flexing on her in her own home.

Sounds of the pursuing Iron Palm Gang reach Madam Ying’s home, and Lotus and Guo Jing are faced with a choice to ask Madam Ying for help, or to continue fleeing. Finally, for once, the kids face a new person with a little less trust, not quite counting on Madam Ying to be of assistance. In trying to leave, Guo Jing ends up trading blows with Madam Ying.

This exchange only depresses Madam Ying further. She can tell that Guo Jing is holding back, and yet he’s more than capable of keeping up with her. She’s spent years in isolation in this dank swamp to study and improve her kung fu and math skills, only to be shown up by two punk kids who show up at her door. But! She realizes that maybe these kids can be used for her own purposes.

She informs Guo Jing that Lotus only has three days to live, given the severity of her wound. There is only one person who can heal her, and Madam Ying gives them directions to Peach Spring, and sealed instructions to open when they arrive that will point them to their next destination.

Madam Ying is some kind of enemy to Lord Huang, so she and Lotus do not get along. Lotus leaves Madam Ying with a particularly hard math problem to puzzle over before she and Guo Jing leave. Typical, Lotus has to flex again, even as she goes out the door.

Guo Jing calls Ulaan, his horse, to them and he and Lotus ride to the village of Peach Spring. There they spend the night and open Madam Ying’s first packet. The message inside tells them that the only one capable of healing Lotus is King Duan, who is in seclusion just past Peach Spring. He is supposedly in seclusion for evil deeds he has done, and he is protected by a fisher, a logger, a farmer, and a scholar.

Our plucky couple heads out the next day and finally come upon the fisher, who is fishing very intently in a pool at the base of a waterfall. Above the pool, a mountain rises  He is trying to catch a pair of golden salamanders that escaped him. Lotus sweet talks the fisher by promising to bring him a pair of her own golden salamanders from Peach Blossom Island. She has Guo Jing tie a note requesting such to the condors, then they send the condors off.

When this isn’t enough to gain them passage, Guo Jing jumps into the pool to retrieve the salamanders himself. His kung fu is astounding now, allowing him to withstand the pounding force of the waterfall, while lifting a huge boulder to capture the salamanders. He brings the captured salamanders up, and still the fisher refuses, stating that it is his duty to repel all those who seek King Duan, even if they have been sent by someone such as Chief Hong.

Guo Jing is ready to leave, resigned to losing Lotus, when Lotus casually asks the fisher how they would even ascend past the waterfall. The fisher explains that there is another branch of the river and it is possible to row upstream. When the fisher turns his back Lotus runs off for the other branch, forcing Guo Jing to steal the fisher’s boat and follow. Before the fisher can stop them they’ve launched the boat and Guo Jing is using his considerable kung fu to row upstream.

The next guardian they find is the logger. There’s a recurring theme here of different songs sung to the tune of ‘Goats on the Hill.’ Lotus gains insight to each man singing the tune, learning something about their history.

(Is this a real song? Anyone know anything about this?)

Lotus surmises that the logger may have been one of King Duan’s generals, who chose to join his king in seclusion to protect him. She sings the song back to the logger, changing the lyrics to flatter the general. He likes the song so much that he waves Lotus and Guo Jing through, assuming that since they’ve arrived, the fisher must have escorted them up the river.

Guo Jing carries Lotus up the next section of the mountain and they find the farmer in an…odd situation. The farmer is holding up a giant boulder, on top of which there is a massive ox. Ever helpful, Guo Jing leaps to the farmer’s aid, getting under the boulder and taking the load off the farmer. This is very impressive to the farmer, who assumed Guo Jing would be crushed by the weight.

Before the farmer helps the ox down, he questions Guo Jing and Lotus about why they are here. When it is clear that they are here to find King Duan, the farmer begins to stall, knowing that Guo Jing is now trapped under the boulder.

Lotus begs the farmer to help Guo Jing, saying that the force of the boulder will hurt Guo Jing’s hands. She asks the farmer to place her Hedgehog Chainmail on Guo Jing’s shoulders, so that he may bear the weight on his shoulders and save his hands.

The farmer places the Hedgehog Chainmail, then helps support the boulder as he eases it onto Guo Jing’s shoulders. At this moment Lotus yells to Guo Jing to jump away, which he does instantly, leaving the farmer right back where he started.

And that’s it! You’ll have to wait until next week to see how Lotus outsmarts the scholar, the final guardian before King Duan.