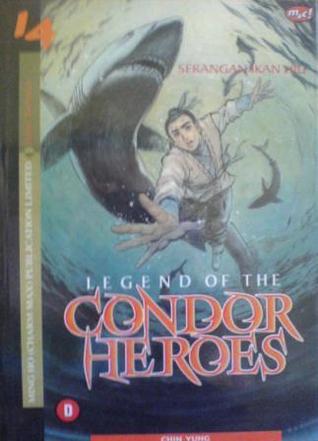 Or, Even More Terrible Decisions

So, Lotus and Guo Jing are still stuck on the island with their mortal enemies, whom they’ve been constantly fighting with…and whom they just bailed out of certain doom.

Our heroes truly are the architects of their own downfall.

Finally freed from beneath the rock, Gallant is pulled to safety. Ever ungrateful in defeat, Viper unceremoniously boots Lotus, Guo Jing, and Count Seven from the cave in which Count Seven has been recuperating. Count Seven knows that his disciples, while powerful, are not enough to defeat Viper on their own, so he accepts being sent out of the cave. Viper demands that Lotus bring them food and water, and commands Guo Jing to fell a hundred trees.

While Lotus is able to attend to Gallant’s wounds, Guo Jing is hard-pressed to bring down so many trees and quickly runs out of gas. He consults with Count Seven and the two of them go over parts of the Nine Yin Manual that Guo Jing recites out loud. Count Seven is able to give Guo Jing some insight into his kung fu, particularly the Hollow Fist that he was taught by Zhou Botong.

Days pass in this way. Count Seven’s health improves, although he accepts that he will never be the martial master he once was. He teaches Guo Jing and Lotus what he can from Guo Jing’s recitations of the Nine Yin Manual. Our heroes finally decide to make themselves a raft and leave the island, abandoning Viper and Gallant.

Of course, nothing goes as planned and the morning after they finish the raft, they wake to find that The Ouyangs have stolen the raft and are already drifting away. Guo Jing and Lotus bend a palm tree to use as a catapult, hurling rocks into the ocean to no effect. Lotus gets on the tree and has Guo Jing launch her towards the raft. She uses her knife to weaken the ropes holding the raft together before swimming back to shore. Our heroes have a good laugh at Lotus’ quick thinking and set themselves to making a new raft as quickly as possible.

Keeping in theme with the One Road Through China, our heroes set out on their own raft, and soon find Viper and Gallant bobbing in the water, crying out for help amidst the wreckage of their raft.

And of course, they drag them aboard their own raft. The very people they tried to kill by successfully sabotaging the raft. So they sabotaged the raft, and are now sabotaging the success of that sabotage?

Tensions on the raft quickly come to a head and Lotus and Guo Jing are locked in battle with Viper Ouyang. He’s in wretched condition from floating in the ocean for days, so it’s about an even match. In a bid to tip the fight in their favor, Lotus dives into the water and cuts the ropes holding the raft together, hoping to drop Viper back into the water. Just as the raft is coming apart, a boat arrives and drags all of them out of the sea.

And this truly is the Smallest Ocean as the boat holds none other than Wanyan Honglie, Wanyan Kang (Yang Kang), and the other martial masters we haven’t seen in a while, Browbeater Hou, Lama Supreme Wisdom, Tiger Peng, Hector Sha, and Ginseng Liang.

Just when you thought it was getting easy to keep track of everyone!

What are all these guys doing out here on the water? When we last left them in A Bond Undone, Wanyan Honglie had been advocating to find the lost writings of General Yue Fei’s battle strategies as an edge against the advancing Mongolians. Now we learn that the Mongolians have been holding Yanjing under siege for months, and they have taken control of the surrounding villages. The Sixth Prince of Jin hoped to travel quietly to Lin’an and search for the strategies.

(I am terrible with the geography here. Is travelling by boat reasonable?)

The action aboard the boat now is mostly a lot of d*** swinging as some of these guys don’t know the others, and everyone keeps trying to one up each other.

Two important things do happen though: Zhou Botong shows up (not dead). He’s been riding around the ocean on the back of a shark this whole time. (Awesome) Zhou comes aboard and backs up his martial brother.

The other thing: Apothecary Huang shows up on his own boat. He’s been hunting down his daughter, fearing that she would find Guo Jing and end up dying on the doomed boat.

Huang files into a manic depressive rage, plays a tune on his flute and sings a song lamenting the loss of his daughter. He plays his flute until it breaks in two. He leaves in a rage, but has no one to vent his anger onto. Guo Jing is dead. Count Seven is dead. He finally focuses his anger on the Seven Freaks of the South. If they had never trained Guo Jing, he never would have met Lotus and she wouldn’t have died. He lands his boat and begins walking towards Jiaxing.