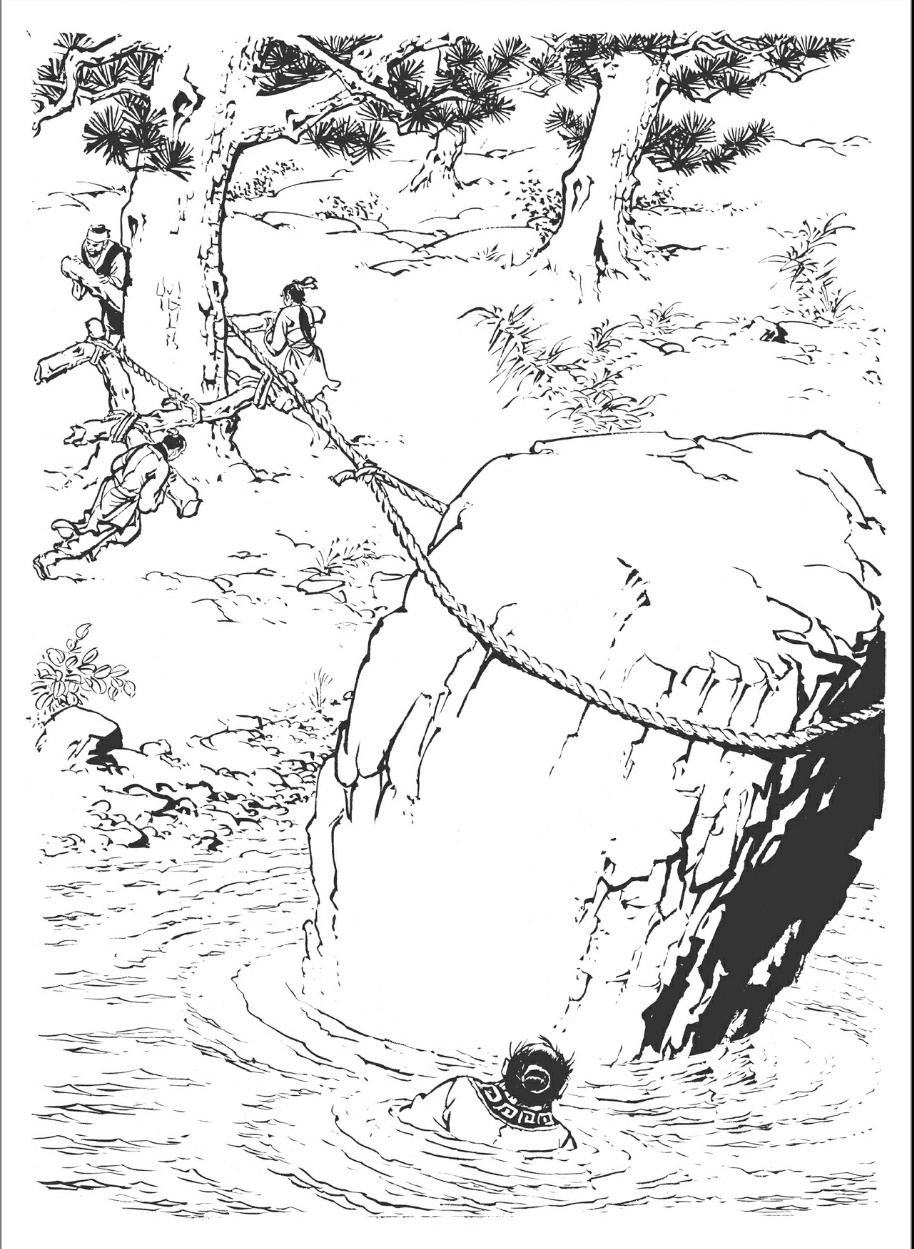 Or, Lotus Has an Adventure

The action this week picks up right in the midst of all the chaos, with Count Seven and Viper Ouyang still battling as the ship burns down around them. Count Seven is pressing his slight advantage, and Viper decides to unveil his Sacred Snake Fist kung fu, something he had hoped to save until the next Contest of Mount Hua. He knows that with his secret technique, he will be able to overcome the Beggar King easily.

Viper is so stunned that he loses track of the fight. A burning sail crashes down on him and sets him on fire. Unwilling to win in such a dishonorable way, Count Seven rescues Viper from beneath the burning sail.

Viper takes this opportunity to strike at Count Seven’s back with both a palm strike and one of his hidden vipers. What a jerk!

Guo Jing leaps onto the boat, determined to save his shifu. He closes in on Viper, and despite his skills being inferior to Viper, Guo Jing is able to use his Mongolian wrestling techniques to gain a slight advantage. Lotus comes aboard as well and although Guo Jing has Viper somewhat pinned, he can’t hold him still enough for Lotus to deliver a fatal blow. Guo Jing tells Lotus to instead take their shifu to safety.

Lotus plunges off the boat with Count Seven and makes it back to the rowboat, bargaining with Gallant to let them board. After they are all aboard the main boat sinks in a whirlpool, sucking Guo Jing and Viper Ouyang to the depths of the sea.

The little row boat eventually runs aground on a small deserted island. Lotus bargains with Gallant to help bring Count Seven ashore. Her shifu is in great pain, his qi flow blocked by Viper’s palm strike, and his body shutting down from snake poison.

Gallant, slimy creep that he is, is secretly overjoyed at the prospect of being stranded on a desert island with Lotus.

(I mean, is he really secretly overjoyed? I feel like he would be the kind of guy who constantly has a smug grin on his face when things are going his way.)

Lotus attempts to nurse Count Seven back to health while at the same time fending off Gallant’s unwanted advances. Gallant is just…ugh. This guy. Yuck. He can’t wait for Count Seven to die because then Lotus will have no reason to resist his advances. [shudder]

Count Seven knows that he is gravely hurt. Even if he is healed, he knows he will no longer be the martial master he once was. He bestows the title of the Chief of the Beggars upon Lotus, and pledges to teach her the ways of the Dog Beating Cane. Lotus does her best to learn, but she has always been an amateur at best when it comes to kung fu.

Gallant keeps trying to get into Lotus’ robes as the days pass. He’s really the single-minded horndog of the whole series. And on top of all this, we learn in this chapter that Gallant is in his forties! While Lotus is only fifteen!

Count Seven’s health slowly improves under Lotus’ tender care. She (in an amazingly short amount of time) catches rabbits, fish, and giant clams for them to eat. Gallant continues to harass her, and while she is not strong enough to defeat him, she finds a way to get away from him, but she knows that she needs to find a way to beat him.

Eventually Lotus finds a spot on the island where a massive boulder overhangs the beach. Vines that trail on the ground have grown and twined around the bolder, acting as a natural trigger to bring down the boulder. Lotus finally knows how she can overcome Gallant.

Lotus lures Gallant into chasing her (not difficult) and leads him to the deadfall under the boulder. Too late, Gallant feels the rush of air coming down on him and he tries to leap out of the way. It’s not enough and his legs are pinned underneath the boulder.

Before Lotus can celebrate though, she spots two figures on the beach. It is in fact, Guo Jing and Viper Ouyang, both rescued from the sea by clinging to driftwood from the wreckage of the ship.

Viper is beside himself, seeing his nephew Gallant, pinned under the boulder. Apparently, Gallant is not actually his nephew, but his illegitimate son by his sister-in-law. Just, augh. How many reasons do I need to dislike this family?

Guo Jing makes a half-hearted attempt to free Gallant (can’t blame him, really) and then he and Lotus are off on their way. Guo Jing is deliriously happy to be reunited with both his love and his shifu.

Back at the cave where Count Seven is convalescing, our heroes have a happy reunion that is interrupted by Viper barging into the cave. He overpowers Guo Jing and Lotus and grabs Count Seven. Viper trades for Gallant’s life, saying that he will not harm Count Seven if Lotus and Guo Jing help him to free Gallant. They agree to the terms, although Guo Jing is clearly more interested in holding up his end of the bargain than Lotus.

Back at the boulder, things are getting grim. The tide is coming in, and when it is at high tide, Gallant will drown. Lotus comes up with a plan to wrap a makeshift rope around the boulder, and she had Guo Jing and Viper fell tree trunks to craft a makeshift winch to pull at the boulder.

They are too slow, however and the tide swallows Gallant. Viper sends the kids away to say goodbye to his son. Lotus, ever nosy, insists that she and Guo Jing stay close to hear what he says. They overhear Viper telling Gallant that he will grant Gallant’s wish and kill Lotus, sending her to the afterlife with him.

Lotus comes up with a way to save Gallant. She cuts a hollow reed, which allows him to breathe during high tide. Then she swears to Viper that tomorrow at high tide, aid will arrive to save Gallant.

The next day Viper is all hot to get Gallant out from under the rock, but Lotus is content with playing on the beach with Guo Jing. And I think she doesn’t mind seeing Viper sweat a little bit. As the tide comes in she reveals her plan, to strap logs to the boulder and increase its buoyancy, so that they can pull the boulder off at high tide.

The plan works, and everyone celebrates, temporarily forgetting that they’ve all sworn to kill each other. (And my hopes for never seeing Gallant again are dashed.)