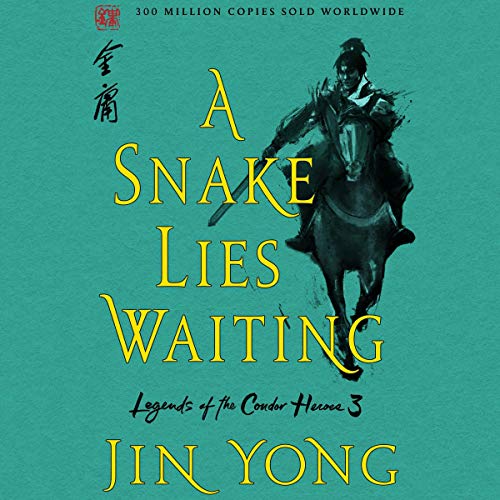 Or, Guo Jing and Count Seven’s Adventure on the High Seas

The next volume in the Condor Heroes series starts off with a bang, literally throwing our plucky hero into the deep end. Guo Jing, Zhou Botong, and Count Seven discover what the mute crew has been trying to tell them. Lord Huang’s magnificent ship is falling apart around them and they are already sinking into the sea. In mere moments the ship breaks apart and everyone is tossed into the drink. Guo Jing and Count Seven manage to salvage the main mast of the ship and rescue Zhou from the waters.

(No mention is made of the many crew members, so I guess they all went down with the doomed ship?)

Of course, the life of a wulin master is always fraught with danger, even on the high seas, and the three survivors are soon beset on all sides by circling sharks. The three men defend themselves and soon the sea around them is filled with dead sharks.

Just when the men are resigned to dying inside the belly of a shark, a boat appears on the horizon. Of course, it is Viper Ouyang’s boat and Guo Jing and the others are pulled from the water.

Aboard the boat, there is immediately more machismo, and Viper boasts that he could have killed many more sharks with far less effort. Zhou challenges him to prove it, and Viper uses the poison from the vipers in his staff to kill a shark, which then kills the sharks that eat it, which then kills the sharks that eat them… And I told three friends, and they told three friends…

And then the boat is surrounded by thousands of dead sharks. I know they did this kind of thing earlier with snakes but somehow this feels worse.

Having lost the bet, Zhou goes off with Viper, while Guo Jing and Count Seven retire to their room. That night Count Seven detects poison in their food, and instructs Guo Jing to only eat the rice, as all the rest is tainted.

Later that night Viper sends for Guo Jing and in a surprise attack, paralyzes Guo Jing. He demands that Guo Jing give them a copy of the Nine Yin Manual. The Hoary Urchin has refused to make good on his bet with Viper Ouyang, and instead of giving him the manual, Zhou chose to jump into the ocean. Guo Jing is shocked but will not reveal the secrets of the Nine Yin Manual to the Ouyangs. Count Seven interrupts their argument and takes Gallant hostage, resulting in a standoff. Count Seven and Viper release both their hostages and return to their rooms. Viper and Gallant are content to wait, thinking that their poison will eventually overcome the two men.

The next morning, when Guo Jing and Count Seven are clearly not in their death throes, the Ouyangs change tactics and beat down the door to their cabin, sending in a herd of poisonous snakes.

(Snakes. Why is it always snakes?)

Guo Jing and Count Seven manage to fight their way out of the cabin and onto the deck, where they climb up the main mast as a defensive position. I guess the snakes can’t slither up the mast?

(It’s over, Anakin! I have the high ground!)

For three days, the two men stay on the mast, avoiding the literal pit of vipers below them. While they are up there, Guo Jing spots two white condors on the horizon. The birds come to him and he realizes that Lotus must be searching for them! They just need to hang on until then. He writes a message asking for help and sends it back with the condors. On the third day Count Seven appears to relent, saying that he will instruct his disciple to give the Nine Yin Manual to the Ouyangs.

In a plan worthy of the Hoary Urchin, Count Seven instructs Guo Jing to give them the manual, but to make fundamental changes to the text to make the instructions unworkable. Such as changing body parts or numbers.

As Guo Jing is writing down the fake manual, Count Seven sneaks into the belly of the ship looking for Viper’s stash of good wine. While he is down there he happens to overhear that the Ouyangs plan to fire the boat as soon as Guo Jing has copied out the manual for them. The casks in the hold are actually filled with oil.

That night Count Seven wakes Guo Jing and instructs him to follow him silently and without question. The two men make their way to the side of the boat and climb down into the water. From there they swim to the small boat being towed, get into the boat and cut it free. Not long after they have freed the boat, fire ignites on the larger boat (there’s a lesson here about counting unhatched chickens) and they spot Viper Ouyang at the rail, cursing the missing rowboat.

Just as our heroes have gotten away, another boat appears. It is Lotus and she is hopping mad! She sails right up to the burning boat (bad decision) and jumps aboard (worse decision) to take on Viper and Gallant (worst decision) to save Guo Jing. Lotus’ boat, crewed by her father’s deaf-mutes, sailed away as soon as she was off their boat (good decisions!). Now Lotus is stuck on the burning boat!

Guo Jing and Count Seven row like crazy to get back to the burning boat. Viper sees the row boat returning and captures Lotus to use as a hostage. Count Seven leaps aboard the boat to fight him. Gallant takes Lotus onto the row boat. Guo Jing is so focused on the duel between Count Seven and Viper Ouyang that it takes him a while to realize that Lotus has been paralyzed and still held by Gallant.

Up on the burning boat, Count Seven and Viper Ouyang are really getting into a groove and they are both fighting with their weapons now. Count Seven with his Dog-Beating Cane, and Viper Ouyang with his Serpent Staff. Guo Jing is amazed, and he wants to help but he also knows that he can’t contribute anything to such a high level battle. The two masters continue to fight as the ship burns, breaks apart, and begins to sink into the waves.

Well, that was a rousing start to the third book. Again, I believe the original serial nature of the story is showing through. The whole bit with the sharks is a bit of an unwieldy sidequest when we read the chapter as a whole, but it probably would have stood on its own if broken up into smaller parts, giving the reader pauses where you don’t know what’s going to happen to them.

I wonder how the bit with the sharks was even adapted into the various television versions? Did they just skip over it?