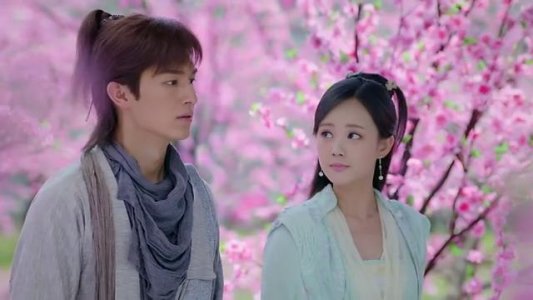 or, Secrets are Revealed and No One Is Happy

The conclusion of book two is upon us! Will Guo Jing and Lotus find happiness? Will they at least manage to not get beat up/killed by the feuding masters? Will anybody get off Lord Huang’s island?

Guo Jing has, improbably, unexpectedly, won Lord Huang’s test of kung fu for the right to his daughter’s hand in marriage. This, of course, is unacceptable.

Under direct questioning, Guo Jing reveals that he did not know he was reciting the Nine Yin Manual, but simply reciting what Zhou Botong had taught him, as it was close enough to what he could read in Lord Huang’s book.

Of course! That explains it! Oddly, no one seems impressed by the fact that Guo Jing learned the entire manual by brute force over the course of…what, a few weeks? I don’t have a good sense of how long he has been trapped on the island.

Without the possibility of obtaining the Nine Yin Manual, Viper Ouyang tries to beg off but his son, Gallant, wants to stay. Why? Lotus, of course. Say what you will about this guy, he’s definitely focused on his goal.

Lord Huang had promised to impart any of his personal knowledge to the loser of the test, so Gallant asks to be taught the intricacies of the island’s layout, as he hopes this will allow him to spend more time on the island and try to woo/seduce/catfish Lotus.

This is problematic for Lord Huang because he doesn’t actually want anyone to know the secrets behind his home. In the end he gives Gallant a scroll containing all his knowledge about the construction of his home, but with the restriction that he may not leave Lin’an with the scroll, and he is only allowed to study it, not make copies.

Viper Ouyang, however, is after more interesting news. He thinks Huang is hiding the Hoary Urchin on the island. If Zhou Botong really taught Guo Jing, then perhaps Zhou is truly the Greatest Martial Master. He manages to goad Huang into not only revealing that Zhou is on the island, but then taking them all to the cave where Zhou has been hiding all these years.

What follows is one of the more humorous scenes in the books so far.

As Huang approaches the cave, he falls into a rapid succession of traps. Traps expertly laid out in a fashion that also predict what Lord Huang would do in response to each one. In the end the Lord of Peach Blossom Island is unable to escape, and finds himself standing in the Hoary Urchin’s crap and covered in his piss. Yuck.

The group goes out in search of and finds the Hoary Urchin who is strolling along the shores of the beach with his hands tied in front of him. Huang offers to let Zhou free of the island if the Nine Yin Manual is returned. Zhou makes a show of returning it, and then uses his internal kung fu to shred the books into little pieces.

Enraged, Huang attacks. At first, Zhou will not fight back or even free his hands. Huang eventually presses Zhou hard enough that he must free his hands in order to defend, but even then he will only fight with one hand. Only Huang eventually knocks him down does Zhou reveal that in teaching Guo Jing the Nine Yin Manual he accidentally learned the techniques himself. He therefore bound his hands in order to not disobey the instruction of his martial master.

Apothecary Huang is stunned. He gives Zhou some pills to heal himself and he apologizes and acknowledges that Zhou Botong is the Greatest Martial Master. Huang gives Zhou free passage from the island.

Down at the shore Zhou wants only to leave on the biggest boat at the dock, but Huang is unwilling to let them sail on that boat. He only gives evasive answers about the poor condition of the boat, but from the outside the boat looks fine. Zhou actually throws a fall down kicking tantrum to get his way. Huang relents and tells Guo Jing to go with Zhou and Count Seven on the grand boat (hmm…not ominous at all).

Ever unable to quit while he’s ahead, Zhou throws one last zinger at Huang, telling him that Guo Jing did in fact know he was learning the Nine Yin Manual. This is of course, lies, but it infuriates Lord Huang who has lost so much pride today. His daughter betrothed to Guo Jing, the title of Martial Master gone to the Hoary Urchin, the secrets of his home gone to Gallant Ouyang. This is the last straw. He banishes Guo Jing from his island, and warns him that he will be killed if he returns. He kills one of his servants in spectacular fashion to make his point. What a jerk.

There’s nothing else to do. Lord Huang disappears into the island and Lotus runs after him. Count Seven, the Hoary Urchin, and Guo Jing board Lord Huang’s fine boat and make their way across the lake. Before they get very far one of Huang’s mute servants arrives in a panic, but is unable to communicate what’s happening. Uh-oh.

Back on the island, Lotus goes to her mother’s grave to grieve her loss of Guo Jing, when they had been so close to happiness. She falls asleep in the crypt and wakes to find that her father has also come here to speak with his dead wife.

And only now do we learn the secret behind the grand boat our hero is now sailing on. In his despair over the loss of his wife, Lord Huang devised the best way to join her in the afterlife. He had a grand ship built that was designed to disintegrate when it took to the seas. He had only put off his own death due to wanting to get back the Nine Yin Manual and caring for his daughter. Now with Guo Jing on the ship he feels like he is sending the manual back to his dead wife on the funeral ship he had intended for himself.

Now in a panic, Lotus runs to the shore and commandeers the first ship she can find, ordering them to set sail. But how will she find Guo Jing?

And on that cliffhanger, book two comes to a close! We will start book three next week, A Snake Lies Waiting.