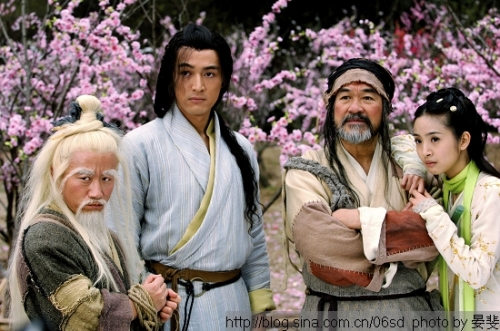 Or, Guo Jing Comes Over for Dinner

Things are really building to a head now, as all interested parties converge on Peach Blossom Island for Lotus’ hand in marriage. Who will be her lucky guy?

When we last left Guo Jing he was following a herd of snakes across the island. He finds Apothecary Huang and Lotus, along with Viper and Gallant Ouyang. The Ouyangs are here to negotiate for Lotus’ hand in marriage.

There’s a bit of talking and faint praise passed between the two families. The Ouyangs are really here to get a shot at the Nine Yin Manual, and Apothecary Huang is hoping that Gallant Ouyang makes a better match for Lotus than Guo Jing, whom he can’t stand. Lotus just wants to die rather than marry Gallant.

Viper Ouyang and Apothecary Huang both try roundabout ways to take their measure of the other man, without resorting to outright blows. They haven’t seen each other in years, and they are being careful, in case the other has substantially improved their kung fu. Lotus makes her objections loudly, even telling her father she’d rather die, and attacking Gallant with her needles.

Viper and Apothecary decide to play music together as a way to measure each other’s kung fu. Guo Jing listens raptly, and has an epiphany about his own kung fu. The musical duel reaches a stalemate when another sound emerges from the woods and Count Seven arrives. The musical duel becomes an evenly matched three-way battle and Guo Jing accidentally outs himself by cheering at the intense battle.

Apothecary Huang pulls Guo Jing out of his hiding spot and Lotus is overjoyed and hugs him. Gallant is overcome with jealousy and he strikes out at Guo Jing.

Lol, can you guess what’s going to happen? That’s right, Guo Jing goes Neo on Gallant. He catches the movement out of the corner of his eye, and his improved kung fu skills smack Gallant down in an eyeblink, breaking several of Gallant’s ribs. Everyone is stunned and Lotus is delighted.

There’s more posturing between the three masters but they all agree that they are all equals and deserve respect from each other.

Count Seven then asks Lord Huang for a favor, to which Huang agrees. Count Seven then reveals that his request is for the betrothal of Lotus and Guo Jing, trapping Huang in a bind of having his daughter promised to two men.

Apothecary Huang has no doubt in his mind. He will not see his daughter wed to Guo Jing, whom he views as an idiot not worthy of his daughter, as well as the hateful child who killed his disciple, Hurricane Chen. Huang proposes a series of three tests of kung fu to determine which suitor is the best match for Lotus. Because of Gallant’s broken ribs, the test will not involve fighting.

Count Seven and Viper Ouyang get into a protracted fight over the terms of Huang’s test. The fight goes on for a while, with neither man able to gain the advantage on the other. Again, Guo Jing watches raptly and he gains even more understanding of the kung fu he learned from Zhou Botong.

In the midst of this fight Lotus accidentally ends up in the line of fire, and nearly takes a full force attack from Viper. Guo Jing leaps in to protect her and launches a counterattack to dispel the force with all his might. Lotus is saved due to Guo Jing’s skill and strength, although everyone else rationalizes their own reasons why Guo Jing was not obliterated by Viper’s strike.

This does end Hong and Ouyang’s fight though, and they agree to Huang’s trials. The first trial is a test of their martial skills. Guo Jing and Gallant each stand atop a tall pine tree, and they are tested on their martial skills as Count Seven and Viper Ouyang each try to dislodge the other’s student. Guo Jing holds his own against Viper and only falls when Viper breaks the rules and attacks to injure. Gallant falls at the same time and Guo Jing manages to perform a Mongolian wrestling move in midair to force Gallant to hit the ground first.

Guo Jing’s win in the first trial is really vexing to Lord Huang, who is (not so) secretly trying to tilt the trials in the Ouyangs’ favor. The second trial is of the arts. Huang plays a tune on his flute and asks the suitors to keep time with the tempo of the music. Gallant, raised with an appreciation for the finer arts, is able to keep time with the music with no effort at all. Guo Jing is hopeless until he begins to look at the music as a duel, the same way he did prior. He begins setting a beat that competes against Lord Huang’s tune.

Intrigued, Lord Huang fights back against Guo Jing’s primitive music. Gallant gets completely lost and loses the timing, becoming ensnared in the music. The musical duel goes on for long enough for Lord Huang to be impressed with the level of Guo Jing’s internal kung fu. He lets the music dissipate before Guo Jing can injure himself trying to keep up. Lord Huang calls this trial a draw as Gallant kept time to the music, but Guo Jing has better kung fu. Again, he’s trying to keep tilting things to Gallant.

Golly, which book do you think it is?

Gallant is overjoyed to finally lay eyes on the Nine Yin Manual. Guo Jing has never seen the book, having only been taught it verbally by Zhou. As they begin to read it, Gallant quickly gets lost in the theory. He understands the words, but the sentences make no sense and they are difficult to commit to memory. Guo Jing, on the other hand, is dumbfounded that the teachings he has memorized in his studies with Zhou are actually the Nine Yin Manual. He can’t read the whole book, but enough of the writings match that he has no other gambit to play.

When the suitors begin reciting, Guo Jing is able to recite the entire book, cover to cover, without error, even correctly reciting passages that had been obscured in Lord Huang’s copy. Of course, because Guo Jing was taught from Zhou’s original of the text!

Apothecary Huang sees this event as a sign from his dead wife, speaking to him through Guo Jing. She has selected who should marry Lotus.

Lotus is overjoyed and surprised. Count Seven is flabbergasted.

Lord Huang comes to his decision and grants Lotus’ hand to Guo Jing. Guo Jing falls to the ground, kowtowing to his father-in-law.

Well, everything seems to be going just peachy for our lovebirds, eh? Surely, the road before them is smoothly paved into their old age… nah. I’m sure there’s more rocky terrain ahead of them. Only one more chapter and then we’ll be moving into the third book! See you next week…

Don’t forget that if you want to catch up with us, we are currently in the middle of the third book, A Snake Lies Waiting, in our Facebook group, Fans of Asian Urban Fantasy. Come join us there!