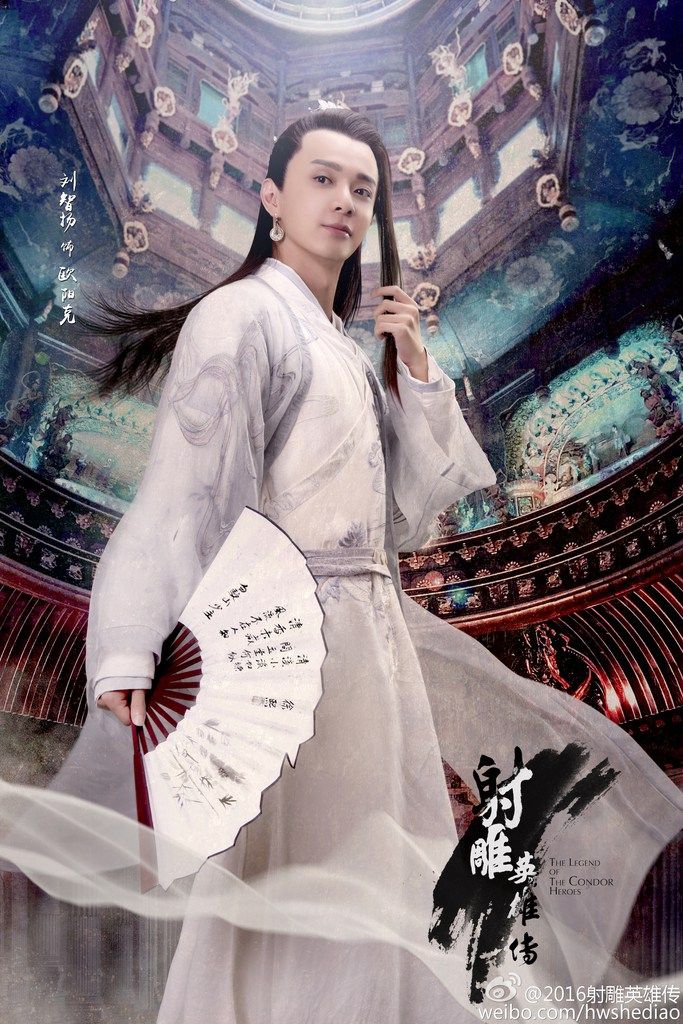 Or, Gallant Ouyang Makes His Case to be the Biggest Jerk in the Story (spoilers ahead)

After Apothecary Huang and Lotus leave, the shattered remains of Zephyr Lu’s garden party are left to pick up the pieces. People are dug out from under the wreckage and dusted off. One of these men is Justice Duan (remember him? The man who aided in the abduction of Lily Li and Charity Bao?) Zephyr stays true to his word and promises to release Wanyan Kang and his men.

Then Justice Duan ruins everyone’s good mood by revealing his name in front of Guo Jing and the Six Freaks. Guo Jing demonstrates incredible restraint by silently acknowledging Duan before marching him off into the back room. (hoo boy, I wonder what’s coming next?) The Six Freaks follow eagerly, clearly knowing what’s coming next. Zephyr, his son, and Wanyan Kang follow, curious.

Guo Jing has his shifu write a spirit tablet for his deceased father, Skyfury Guo. At the sight of the dead man’s name, the other shoe finally drops for Justice Duan, and he realizes that he’s up to his neck in it. Duan takes the only path he can see that might not end in his death, and falls to his knees, begging forgiveness and throwing Wanyan Honglie under the proverbial bus. He tearfully confesses how the Jin prince fell in love with Charity Bao and then ordered the deaths of Skyfury Guo and Ironheart Yang.

(Remember the scene in True Lies, where Arnold Schwarzenegger and Tom Arnold get that confession out of the used car salesman? It’s like that.)

Well, this confession may have bought some goodwill with Guo Jing, but it seems Duan didn’t count on what might happen by badmouthing the prince in front of his ‘son.’ Wanyan Kang jumps on the man and crushes his skull with his hands. Yow. Kang falls to his knees at his true father’s spirit tablet and renounces his father and becomes Guo Jing’s sworn brother. The two of them agree to travel to Yanjing in order to kill Wanyan Honglie.

(Does all of this seem rather…sudden…to anyone else? And in this particular book, that’s saying something!)

The next day, Guo Jing parts ways with the Six Freaks. They agree to meet again in a month, at the Garden of the Eight Drunken Immortals, and the Freaks will accompany Guo Jing to Peach Blossom Island. Afterwards Guo Jing and Yang Kang (having taken his true father’s name) ride off to Yanjing.

True to form, Kang is already having buyer’s remorse about renouncing Wanyan Honglie, and now he silently debates whether or not to try to warn the prince about Guo Jing’s plans. As the two men travel, it is obvious to the reader that Kang has nothing in common with the good-hearted Guo Jing. They stop at inns to rest and always find the proprietors of the inns ready to receive them, with meals ready for them. Guo Jing thinks he knows what’s up and he rides ahead.

Sure enough he finds Lotus ahead of their path. They have a happy reunion (gag) and then immediately get into shenanigans when they overhear two beggars discussing plans to break into a young woman’s chambers. Staying on brand, the two of them decide to intervene, despite not really knowing what’s going on.

That night, our intrepid couple sneaks in to see what’s going on. They discover that the beggars are Vigor Li and Prosper Yu, members of the Beggar Clan and actually here to protect the young maiden, Miss Cheng. Li instructs the young woman and her maids to hide while he takes her place in her bed. A group of Beggar Clan members hide themselves around the house. In the dead of night intruders enter the house, all clad entirely in white. Great, this guy again.

Gallant Ouyang’s disciples break into the home and quickly wrap up what they think is the young maiden. Guo Jing and Lotus follow after letting the Beggar Clan give chase first. Everyone ends up around a house on the outskirts of town.  Guo Jing and Lotus watch the beggars who are watching what’s going on inside. Gallant Ouyang is inside and he clearly knows the sack does not contain the fair maiden.

A fight ensues when Vigor Li bursts out of the sack and Guo Jing and Lotus make commentary on the fight. Guo Jing notes that even Count Seven Hong’s own man only knows little of the Dragon Subduing Palms. Unfortunately, it is obvious that Gallant Ouyang far outclasses Vigor Li. After a battle where Li is kept on the defensive, Ouyang strikes a blow that freezes Li’s limbs. He falls to the floor, unconscious. Ouyang reveals that he knew of the Beggar’s plan and he has already abducted Miss. Cheng. Just as Ouyang is about to finish off Li, Guo Jing jumps into the fray.

Ouyang is surprised, as he recognizes Guo Jing, but not the strength of his kung fu. Lotus jumps in too and Ouyang falls back on his habits, offering to free the young woman if Lotus goes with him. Ew. Lotus slaps him across the face, provoking Ouyang to strike at her, and he even has the gall to be excited about hitting her so he can touch her breasts. Double Ew.

Luckily Lotus is still wearing her hedgehog chainmail and her armor protects her from Ouyang’s strike. He turns his attention to Guo Jing because “surely, if he killed the boy, she would have no reason to resist his advances.” Ugh. Triple Ew.

The fight between Guo Jing and Gallant Ouyang heats up. The beggars are amazed that the boy knows so much of their leader’s kung fu. Guo Jing even manages to pull off a reasonable Dragon Whips Tail, a move he had only seen Vigor Li perform tonight. As Guo Jing runs through his repertoire of moves, Ouyang sees the pattern and mounts an offensive. Guo Jing, apparently because he really is just dull and unimaginative, only fights by going through the moves he knows in sequence. But this time, he manages to make up one of his own moves on the fly! Progress!

But Guo Jing’s newfound improvisation is no match for a true master, and Ouyang is soon in the advantage again. Just as he is about to land a devastating blow, the master himself, Count Seven Hong appears. Throwing of all things, chicken bones, at Gallant Ouyang. (on brand)

Everything grinds to a halt with the arrival of Count Seven. The fight devolves into the typical bickering over who has the right to call themselves the winner, and who gets bragging rights, and who’s kung fu is better. Lotus backs Count Seven into a corner to truly take Guo Jing on as his disciple and teach him the remaining three moves of the Dragon Subduing Palms. Like, right there. He teaches Guo Jing the rest of the moves right in the house, in front of everyone else. And then pushes Guo Jing back into the ring to fight Gallant Ouyang. Wow. That’s some confidence, eh?

Immediately, Gallant Ouyang realizes that Guo Jing’s power has increased dramatically. So much so that in order to win, he busts out his super secret move! In the face of Ouyang’s secret weapon, Count Seven tells Guo Jing to pull back and the old master admits defeat.

Lotus however, is not willing to let it go. I mean, is she ever? She convinces Count Seven to teach her some new moves, and she uses them in combination with her wits to once again duel with Ouyang inside a circle. Once inside the circle she uses the Skyful of Petals and rains deadly needles down on her opponent. He is only saved by Count Seven intervening. Count Seven figures that Guo Jing and Lotus have done enough by protecting his good name. There is no need to kill Gallant Ouyang today. Weird.

The abducted Miss Cheng and others are freed. Guo Jing, Lotus, and the beggars make plans to meet the next night to have a celebratory feast. Guo Jing and Lotus take Miss Cheng home (apparently Miss Cheng is very shy, but I guess we’ll find out the importance of that later.)

The picture is Gallant Ouyang from one of the many television adaptations. Wow. Such a pretty boy. Too bad he’s such a jerk. A lot of the characters in this series are jerks, actually. That’s my biggest complaint about this story, that there are so few characters to root for. Even Guo Jing’s supposed allies don’t seem like the nicest people. And this is coming from someone (me) who regularly enjoys anti-hero characters. How are you all finding the characters? Do you have a favorite? Perhaps someone you dislike the least? 😊