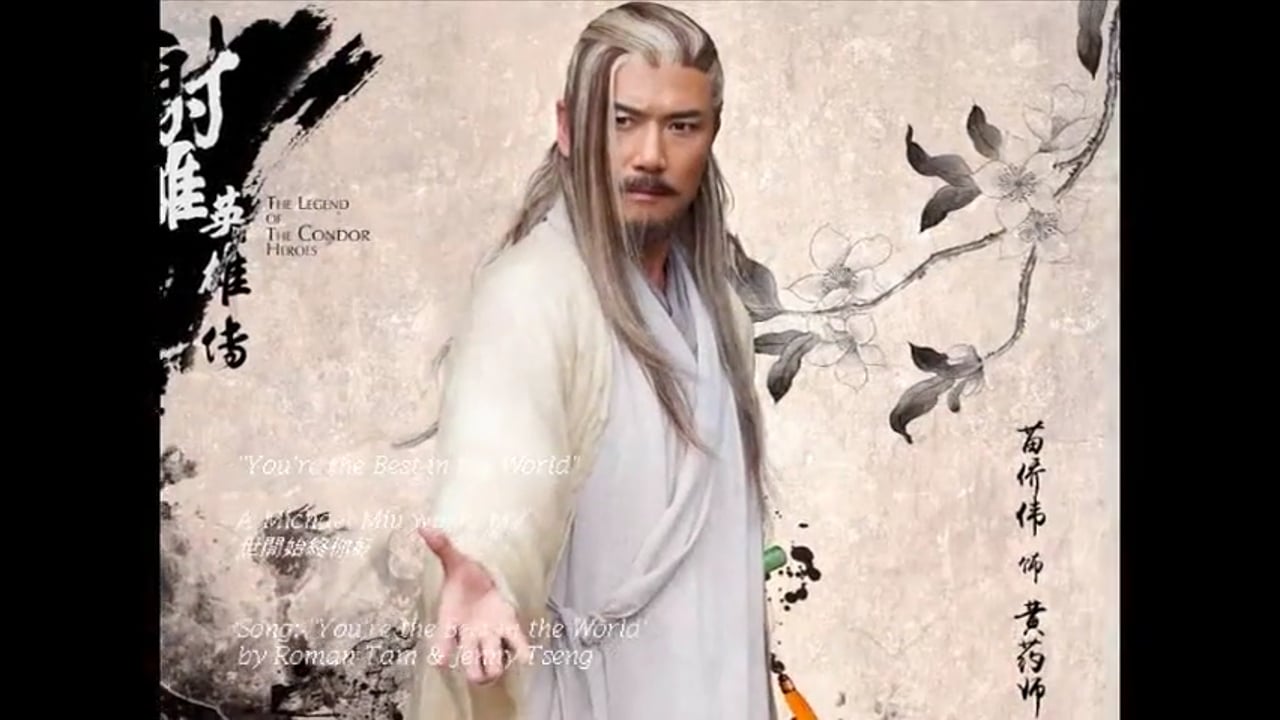 Once again, everyone ends up in the same room, and this chapter revolves around each group’s conflicting loyalties and goals. It’s at times confusing, but it is nice to see things happening, and the increased focus on Guo Jing and (I guess) Lotus helps keep the story grounded. Spoilers ahead!

The Six Freaks of the South arrive at Roaming Cloud Manor and Guo Jing happily greets his shifus. Qiu Qianren is unimpressed but proceeds with his proposal. He proposes that the only reasonable course of action in response to the invading Jin, is for China’s martial heroes to convince the Song empire to surrender.

This is not received well. Squire Lu asks Qiu Qianren to leave. Qianren demonstrates more of his neigong by using a palm strike to break off the lip of a teacup in a perfect circle. (I guess this is supposed to support his argument for military surrender?) Everyone is impressed, so therefore everyone challenges him to a fight. Guo Jing jumps in front of his masters (something I’m positive he wouldn’t have done in the last book) and offers to fight on behalf of his masters.

Of course, we know our boy has more skills than anyone in the room knows, due to his training under Count Seven Hong. Guo Jing launches a Haughty Dragon Repents and surprises Qiaren with the strength of his kung fu. Qiaren decides to go all out and manages to land what looks like a brutal hit on Guo Jing’s chest.

Oh no! Guo Jing goes down, but is apparently unhurt. Now he has a measure of this man’s kung fu, and how weak it really is. Guo Jing jumps back into the fight and smacks Qiu Qiaren completely out of the courtyard! (Heroic cheering)

Cyclone Mei finally shows her face, dragging a very disoriented Qiu Qiaren back into the courtyard. Mei is followed by a man who looks like death itself. A lot of things happen next:

– Wanyan Kang reveals that Cyclone Mei is his shifu

– Squire Lu is revealed as Cyclone Mei’s martial brother, Zephyr Lu. His legs were broken by Apothecary Huang in anger for Cyclone and Hurricane running away with the Nine Yin Manual.

– Mei reveals to everyone (other than Guo Jing and the Six Freaks) that Hurricane was killed.

Qiu Qiaren, apparently upset that he is no longer the center of attention, loudly proclaims that all those present are not true heroes because they do not know of the death of Apothecary Huang. (I don’t know, the logic is a bit of a head scratcher for me.)

This proclamation has the intended effect, as Mei, Lu, and Lotus all collapse into uncontrollable weeping. Lu, who had just feared that Mei was coming to kill him, now wants to join forces with Mei to avenge their shifu’s death.

Zhu Cong, who is really the only one of the Freaks to consistently keep his head and wits about him, decides to really dig into who this Qiu Qiaren is. Zhu Cong approaches the alleged master and greets him, shaking his hand. Of course, in doing so, he picks all his pockets.

Now Qiu Qiaren is revealed as a fraud. Zhu Cong shows off the ring Qiaren wore on his finger to score the teacup, making it possible for him to break the cup so neatly. And look! He was also carrying around extra bricks on his person. Bricks made of flour, which he used to demonstrate his superior neigong to brush a brick to powder.

The tears now change to laughter as the heroes mock Qiu Qiaren. The exposed ‘master’ flees into the night. (I’m not sure what the point of this whole exchange was. Maybe this was just an artifact of the original serial nature of this story.)

Cyclone and Zephyr find a way to reconcile. Zephyr will release Wanyan Kang, and Cyclone will forgive their past enmity. However, Mei will not forgive the Six Freaks for killing her husband. She prepares for battle with the Freaks, and Guo Jing again puts himself in harm’s way. He reveals to Mei that it was he who killed Hurricane Chen, but that it was unintentional. Lotus, knowing of Guo Jing’s improved kung fu, dares Mei to defeat Guo Jing in only fifteen moves.

The battle begins and Guo Jing indeed holds his own against Mei, deploying the Dragon-Subduing Palm. Everyone is gobsmacked, watching Guo Jing put on a kung fu clinic. The Six Freaks wonder where he learned everything. Lotus is delighted to see him standing up to Cyclone Mei. Mei is just pissed that she can’t seem to beat this young upstart.

The fight continues, with Mei getting more and more wild as she tries to break through Guo Jing’s defenses. Finally, she lands a strike with her nails and scratches the back of his hand, drawing blood. Guo Jing has been poisoned. The Six Freaks and Lotus intervene now (now? Only now?) and demand the antidote.

Once again, Zhu Cong keeps his wits and saves the day (perhaps a series about Zhu Cong is in order?) He *giggle* throws a fish into her robes to distract her, allowing him to pick-pocket all her belongings, including the antidote and the Nine Yin Manual.

(Why does everyone carry the antidote to their poisons around with them?)

The antidote is administered and Guo Jing perks up (little does he know that the poisoned snake he, *ahem* nearly ate, has fortified his body against poisons). As the combined force of the Six Freaks bear down on Cyclone Mei, Guo Jing again intervenes (this is becoming a theme for him) and begs his shifus to allow her to live, to allow them all to part ways in peace. Mei only asks for the return of the Nine Yin Manual so she can return it to its rightful owner.

As Zhu Cong pulls out the book, the mysterious stranger in green who has been lurking behind Cyclone Mei for the last two chapters finally materializes and snatches up both the book and Mei before leaving the compound in a single leap. The stranger is in fact Apothecary Huang, Mei and Lu’s old shifu, and Lotus’ father. In the forest outside Roaming Cloud Manor Cyclone Mei falls to her shifu’s feet and begs forgiveness. Huang has been looking for her and for his daughter, and he instructs Mei to take her revenge for Hurricane Chen’s death and then she can come home.

Huang takes them both back to Roaming Cloud Manor, where everyone had been wondering how they left in such a hurry. Now back, Mei challenges Guo Jing to yet another fight, because she can’t bring dishonor on her shifu by not being able to defeat someone who isn’t even really a disciple of Count Seven Hong. She demands that Guo Jing fight her with only his most silent moves, so that she can’t use her heightened senses to detect what is coming.

But…Huang cheats for her (how is this ok with any of them?) He starts flinging little pebbles into their fight, making noise and leading Mei through the battle so she can meet Guo Jing’s moves. After all the posturing from everyone about upholding their martial values and fighting fair, when Apothecary Huang decides to cheat, it’s ok because he’s the baddest bad ass in the room?

Cyclone Mei is getting the upper hand when Lotus tries to get her father’s attention. This distracts Mei and allows Guo Jing to push her back. Huang removes (ew) a layer of skin that he was using as a mask, revealing that he is actually quite handsome and not a vision of death wormed over.

Lotus manages to melt Huang’s hard heart a little and he relents in his position towards Mei and Lu. He gives Lu a treatment that will return the use of his legs, and allows Lu to train his son (Laurel) in the kung fu of Peach Blossom Island.

Huang’s kind-heartedness, however, does not extend to Guo Jing. He’s still not over the fact that Guo Jing killed Hurricane Chen. Lotus tries to fight Guo Jing, to show her father that the kung fu of Peach Blossom Island is the best, but it is not enough for Huang. Apothecary Huang demands that Guo Jing hit him with his best palm strike. Guo Jing is forced to comply to risk disrespecting Apothecary Huang. He launches his strongest strike, only to see his strike foiled, and Huang’s counter attack break Guo Jing’s wrist. Huang leaps into the opening, launching what will be a killing blow.

Lotus freaks out and runs off, telling her father that he will never see her again if he harms Guo Jing. This finally stops the fight. Huang is unable to catch Lotus as she swims out into Lake Tai. Huang is still hungry for vengeance, but Guo Jing again intercedes on behalf of his shifus, asking for a reprieve of thirty days so he can avenge his father’s death, at which time he will present himself to Peach Blossom Island to face his fate. Oddly enough, this works, and Apothecary Huang leaves.

Ok, so, a very long chapter, again with a lot of people involved. I’m still not happy with everyone’s motivations, but the continued greater focus on Guo Jing helps manage that. I’ve been recently listening to the more recent books in the Cradle series, and there are a lot of similarities between Guo Jing’s advancement and Wei Shi Lindon’s growth as a sacred artist. Perhaps that is helping me get through Condor Heroes?

I feel like there’s a lot being set up here for later payoffs. I don’t think Huang left his island and years of self-exile just to find his daughter and Cyclone Mei. And what’s been happening with the Mongolians? I hope they’re going to come back into the story at some point.