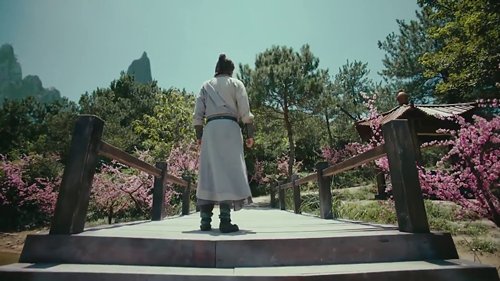 Or, Guo Jing Gets Lost

Guo Jing and Lotus make their way to Peach Blossom Island and we learn the provenance of the Nine Yin Manual that everyone is so hot to get their hands on. Spoilers ahead!

After dropping off Miss Cheng, Lotus and Guo Jing are about to turn in when they stumble upon Yang Kang (remember him? Guo Jing’s newly sworn brother whom he left behind on the road a full chapter ago?), who has finally caught up. Kang is speaking with Gallant Ouyang, which is more than enough to raise Lotus’ antennae, but of course not nearly enough to raise Guo Jing’s.

Guo Jing greets Kang and once again Guo Jing is the only one in the room who isn’t suspicious of anyone? Lotus is suspicious of what Kang was speaking to Ouyang about, and Kang is wary of what may have been heard. Despite the mistrust, they all decide to rest for the night and press on in the morning.

Of course, our heroes rarely have a restful night’s sleep. Riders approach in the early dawn hours and Lotus (true to form) goes out to investigate. Guo Jing notices that the first three riders are on Mongolian horses, being pursued by sixteen others. As the three men approach, Guo Jing recognizes them as Tolui, Jebe, and Boroquil.

Guo Jing leaps to their defense and makes himself known to them. Their pursuers are Jin soldiers! Three of the attackers are in fact the Daemons of the Yellow River, and with his improved kung fu, Guo Jing makes easy work of them and the remaining Jin soldiers. This part was actually quite fun, seeing Guo Jing really letting loose with his new strength.

Guo Jing’s condors make a showing here, and Lotus is immediately smitten with the birds. Of course all this reminds Guo Jing that the first member of his harem, Khojin, is still waiting for him back in Mongolia. Ah well, he reasons that if he goes to Peach Blossom Island and gets killed, then he won’t have to deal with that particular problem. Ha!

We discover that Genghis Khan sent his men south to treat with the Song empire and coordinate an attack on the Jin. Guo Jing’s three friends were the only ones who made it through the Jin lines to the south. Everything starts to fall into place for Guo Jing, as he now realizes what Yang Kang was trying to do in Lin’an with the chancellor.

Guo Jing’s friends tell him that Wanyan Honglie was actually leading the attack on the Mongolians, and he should be nearby. Lotus and Guo Jing run off to try to find and kill him. However they are unable to find him, and Guo Jing’s old friends must continue south and carry out their orders from Genghis Khan. The friends part ways.

Meanwhile, Yang Kang is having serious buyer’s remorse about renouncing the Wanyan name. While Lotus and Guo Jing are beating up the Jin soldiers, Kang finds his adoptive father and hides him from the others. They have a (to me) ridiculous conversation where Kang is debating if he actually has it in him to kill his adoptive father, and Honglie realizing that his adoptive son must have learned the truth of his birth. Kang decides that he really doesn’t want to give up the life of luxury (natch’) and when Wanyan Honglie promises him that they will Rule The Galaxy As Father And Son, Kang goes full Sith and pledges his loyalty to the Jin prince.

Lotus and Guo Jing now find Yang Kang before he can send his father on his way. In trying to find Wanyan Honglie, Lotus actually finds Mercy Mu, who has been locked up in a coffin this whole time, listening in to her beloved (yuck) reconcile with his adoptive father. Needless to say, Mercy is pretty upset with Kang and they fight. Kang says terrible things (on brand) and Mercy collapses after spitting up a mouthful of blood (what?). Kang is immediately filled with regret and his chosen course of action…is to bounce. He bails. What a peach.

Lotus revives Mercy and tries to console her. Mercy is having none of it. She chops off her hair and runs away as well. Lotus and Guo Jing don’t know anything about Kang’s reconciliation with his father.

Guo Jing and Lotus continue on their journey and arrive at Peach Blossom Island. Once on the island, Lotus runs off to her father and leaves Guo Jing to get lost on the island. Really? Guo Jing wanders around and remembers that Lotus said her father’s compound was even more confusing than Roaming Cloud Manor, so now he fears he may simply starve to death trying to find his way out.

At night, ghostly flute music plays that pulls at his mind. Guo Jing meditates, practicing his neigong to cycle his energy and calm himself. The pull of the music fades. Guo Jing finds a deranged man who is being tormented by the music. Using his knowledge of neigong, he helps the man resist the music.

The music is the flute played by Apothecary Huang. The deranged man is Zhou Botong of the Quanzhen sect, and he has been on the island for years being tormented by Huang. Unfortunately, the man is clearly crazy from being alone for so long and being harassed by Huang.

The rest of the chapter is a long-winded retelling of the origin of the Nine Yin Manual. Zhou tells Guo Jing the story of how a government scribe by the name if Huang Shang copied down all the Taoist teachings for the emperor. In doing so he became a true martial master without a shifu. When Sheng finally meets other martial masters in the field and defeats them, he makes all kinds of enemies. In studying to defeat his new enemies, Sheng writes down his studies down into the Nine Yin Manual, the end-all-be-all of kung fu manuals.

Zhou’s story continues with how the Quanzhen sect came into possession of the manual, but Immortal Wang could not bring himself to destroy the manual. When Wang dies, Viper Ouyang, the Venom of the West, attacks to steal the manual from the Quanzhen sect. The coffin with Wang’s body bursts open!

And the chapter ends there. Gah! I guess ending on a cliffhanger is better than just ending in the middle of a scene. 😊

Picture is from one of the television adaptations, but did you know there is actually a Peach Blossom Island? Taohua Island is an island in the Zhoushan Archipelago.