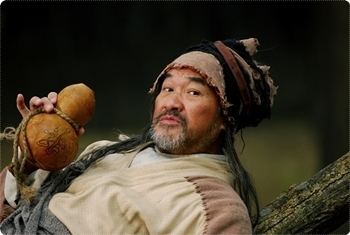 In chapter three we see Guo Jing and Lotus advance their skills quite a bit due to the introduction of the Northern Beggar Count Seven Hong. Spoilers coming!

So, this is the beginning of the chapter that I felt would have been much better served as the end of the previous chapter. Guo Jing and Lotus are sitting down to their meal of roasted stolen chicken, and a stranger approaches and asks to join their meal.

Aha, intriguing! Who is this newcomer? I’m pretty sure we can’t know how the decisions were made of where to cut the story for serial publication, but given the abrupt nature of the breaks in the translation, I have to assume that the translation is being faithful to the Chinese text. I guess this is an artifact of the book being a translation, and not an adaptation?

Anyhoo, Lotus suspects that the beggar is actually one of the Five Greats, the Beggar of the North, the Divine Vagrant Nine Fingers, Count Seven Hong (that’s an impressive business card). The beggar won’t reveal his identity, so Lotus plies him by cooking more and more extravagant dishes. The beggar demonstrates a truly discerning palate, and Lotus proves herself to be an outstanding chef.

Lotus eventually convinces the beggar to teach them kung fu in exchange for more of her cooking. The beggar not only reveals that he is the Northern Beggar, but he’s also determined that Lotus is the daughter of Apothecary Huang.

Hong refuses to teach Guo Jing, stating that Guo Jing is too stupid to learn. Lotus persists, wanting nothing more than for Guo Jing to learn more kung fu so that he can be stronger when he meets the Seven Freaks again.

Using her feminine wiles and promises of more delectable food, Lotus convinces the Northern Beggar to teach Guo Jing. They start right away, with a move called Haughty Dragon Repents, a palm strike technique (which was obviously the inspiration for a lot of Lindon’s techniques in the Cradle series).

Guo Jing proves to be a slow student, only able to learn by relentlessly training, grinding out slow progress day by day. The Northern Beggar’s kung fu is called the Eighteen Dragon-Subduing Palms.

I feel like I should mention here that I’m positive I’m missing a lot of nuance in this chapter, just with the extravagant description of the foods, and the clever names that Lotus comes up with for each dish, some based on poetry and the ingredients. Can someone who’s read the Chinese text and understands the context speak to this?

Ultimately, I think (this is my personal guess) the lesson Guo Jing really takes from his time with the Northern Beggar is the idea of planning for the future. Reserving some of his strength while performing Haughty Dragon Repents, planning his retreat even as he attacks. Up until now Guo Jing seems to have really just lived in the moment. Perhaps this is helping him mature and start to plan ahead?

Lotus learns kung fu as well, although it is revealed that until now, she hasn’t really been committed to improving her kung fu, just doing enough here and there to get by. The Northern Beggar teaches her some of the Wayfaring Fist, a technique that is well-suited to her style of fighting.

One day, Graybeard Liang (still bitter over the loss of his Amazing Snake of Immortality) appears. Guo Jing lets loose with Haughty Dragon Repents and is amazed to see his kung fu working. Unfortunately, he’s only mastered the one move, and Liang soon overpowers him.

Recognizing that only mastering one move is making Guo Jing weak, the Northern Beggar teaches him more of Dragon Subduing Palm. Over the course of several weeks, Guo Jing learns fifteen of the moves while Lotus cooks a different feast each day to appease the Hong’s appetites. However, he refuses to teach Guo Jing the last three moves, reasoning that if Guo Jing knows all eighteen, then he can claim to be the Northern Beggar’s disciple, and he doesn’t want that.

One day a swarm of snakes come out of the woods and the Northern Beggar saves Lotus and Guo Jing from being bitten. The discover that the snakes are being herded by Gallant Ouyang and his disciples.

(Once again, our heroes are staying at the only inn on the only road that goes through all of China.)

Luckily Hong has history with Ouyang as well, being a contemporary of Ouyang’s father, Viper Ouyang. Based on Hong’s reputation, Gallant Ouyang also leaves.  There’s some discussion about why Ouyang is herding snakes and Hong surmises that they are Up to Something. I guess we’ll find out in a future chapter? Is this just clumsy foreshadowing?

In the last part of the chapter, Mercy Mu is also travelling on the One Road in All of China, and Lotus runs into her at the market. There’s a bit of a girl fight where Lotus totally outclasses Mercy and they both determine that they’ve both been taught by the Northern Beggar. Lotus squeezes Mercy to promise that she won’t marry Guo Jing (wow, territorial!), to which Mercy confesses her love for Wanyan Kang.

Well, that flips a switch in Lotus, and now they’re like sisters because they’re not after the same man. Mercy comes to stay with them, and at night she sneaks out to spy on Kang (who is _also_ travelling on the One Road in All of China) and pine for him piteously in the darkness. Lotus followed her and realizes what is happening and presses the issue by making noise and exposing Mercy.

And then, the unthinkable happens. Mercy and Kang have their moment and confess their love for each other. Wanyan Kang, jerk that he is, takes this to mean that they can move right to home plate (he doesn’t even buy her dinner!) but Mercy (go girl! stand up!) puts the kibosh on lover boy and insists that he won’t see the Promised Land until they can be together officially.

I don’t really buy Mercy and Kang as a couple. But, I’m positive that’s a function of my perspective as a reader of modern fiction. And of course, I’m sure that they will have offspring (as Guo Jing and Lotus) will have offspring, and then those offspring will be Mortal Enemies. Or something like that. 😊

I did enjoy reading about Guo Jing and Lotus learning kung fu, but again, the story is really about people doing things, and not a whole lot of conflict. There are fights, but they don’t really mean anything.

Actually, that’s another thing that I’ve determined I have a problem with. I don’t know when the fights mean anything. Like, people get into fights at the drop of a hat, and then the fights stop just as abruptly. Sometimes the fights are friendly, and sometimes they’re out for blood. But the one common factor is that I just Don’t Know. So the fights become pointless because the actual conflict isn’t clear to me. Is this just me? Am I missing something?