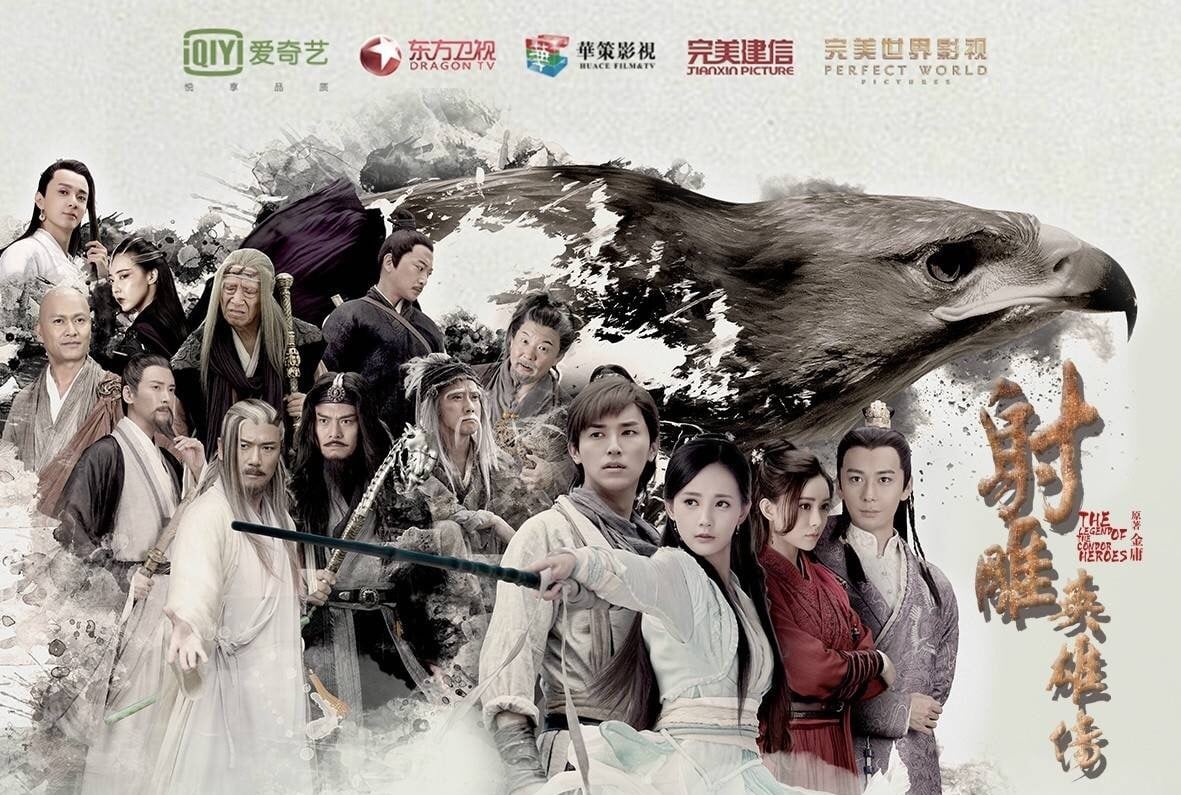 Woof. This was a really long chapter. To save my sanity, I’m going to break it up and this summary will cover sub-chapters 1-3. There’s a ton of action in this chapter as every one shows up to the party! (spoilers! sssh!)

Gallant Ouyang arrives, finding Guo Jing, Lotus, and Cyclone Mei, who he does not recognize. Driven by his loins, me makes another grab for Lotus. Mei stays good to her word and defends Lotus.

Oh boy, does she defend. She slashes Ouyang’s robe and fan to ribbons. Oh, and she manages to insta-kill the four female disciples who followed Ouyang to the garden. Yow! The four young women collapse with finger-shaped holes in their heads.

Lotus tries to make a run for it, pulling Guo Jing with her, but Browbeater Hou arrives and cuts them off. The rest of Wanyan Honglie’s assembled masters pile in, and seeing the damage done to Gallant Ouyang, they realize that the old woman from the cave is half of Twice Foul Dark Wind (doesn’t really roll off the tongue, does it?), Copper Corpse, Cyclone Mei.

Browbeater Hou once again is obsessed with defeating Lotus, and he ends up occupying her, keeping her from protecting Guo Jing.

Guo Jing, meanwhile, gets conscripted as Cyclone Mei’s warhorse. Mei can’t fight effectively without the use of her legs, so he carries her around, in what could be both an amazing and comical action scene. Does anyone remember this scene from any of the various adaptations? Anyone got a YouTube link?

While Guo Jing carts Cyclone Mei around, she drills our hapless hero for the secrets of neigong. Guo Jing answers as best he can, reciting the lessons that Ma Yu taught him.

The fight between Mei and the assembled masters reaches a fever pitch, with deadly strikes and techniques flying left and right. Entranced by the information she’s pumping out of Guo Jing, Mei loses her concentration, allowing the masters to press an advantage against them. Mei resorts to pulling out her White Python Whip, which I mean, why wait? Lead with your best move, right?

With the White Python Whip (so cool!) the fight reaches an impasses until…

The Seven Freaks of the South show up!

And boy, are they ahem surprised to find their golden boy, apparently fighting with (?) Cyclone Mei. I mean, imagine how confused they would be!

And why are they here? This is a strange little aside. The Seven Freaks were tracking Gallant Ouyang (remember, back when they said they would track down the white-clad fighters that were all riding camels? Those are all Ouyang’s female disciples.

The Seven Freaks found out that Ouyang was going to kidnap a new girl for his harem. In order to prevent this they hunt him down and fight him, freeing the girl, and managing to kill two of his disciples.

Wait, what? So in saving a woman from Ouyang’s clutches, they kill two of them who are actually in his thrall?

Lotus uses her big brain again, commenting loudly that Cyclone Mei should give back the Nine Yin Manual. Everyone’s ears perk up at that, and the rogue masters all start plotting how to get the manual.

The end of the fight is actually a let down compared to how it started. One of Honglie’s servants comes to inform the masters that the Consort has been abducted. Well, it would just be rude to keep fighting in light of that information, so the fight just kind of…tapers off. Lame.

Everyone just walks away. Seriously? After all that? Guo Jing goes off with the Seven Freaks. Lotus leaps away on her own. The rogue masters go off to help Honglie find the Consort.

Our attention then moves to Ironheart Yang and Charity Bao. The two lovers reconnect, but all too soon soldiers advance on them. Ironheart will not fail to defend his wife again.

Before he can confront the soldiers, Ma Yu and Qiu Chuji show up, because there’s enough room for everyone in this chapter!

Wanyan Honglie’s masters arrive just as Qiu Chuji is dispatching the soldiers and the masters realize that they can get some serious cred if they defeat two more masters of the Quanzhen Sect.

After the first few scuffles, Tiger Peng pulls a sneaky and manages to poison Ma Yu. Ma Yu and Qui Chuji really turn it on, trying to get the fight over and done before the poison kills Ma Yu.

Ironheart can’t just stand on the sidelines and watch these venerable masters get killed. He leaps into action … and Gallant Ouyang kicks and snaps Ironheart’s spear.

One huge action scene with not a whole lot of payoff, unfortunately. But we did manage to involve nearly everyone in the book so far in the space of a third of a chapter? And hey, now we know what Yang Kang was doing when he dug his fingers into Ironheart’s arms. He was doing a baby version of Cyclone Mei’s finger kill technique! On his dad!