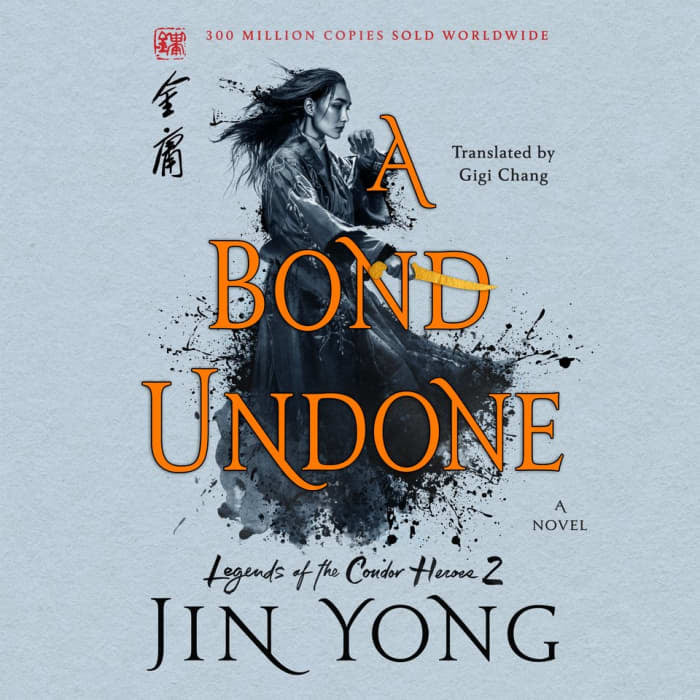 As many people have noted, the Legends of the Condor Heroes was originally serialized and not intended to be read in long form, so we have that particular structure to thank for the odd breaks between the books. Thankfully, A Bond Undone picks up right where A Hero Born left us hanging… (spoilers ahead)

Book two drops us right back into the banquet hall in the palace of Wanyan Honglie, where Lotus is scheming against the martial masters, trying to save her own hide and get outside to rejoin with Guo Jing.

The patriarchy and sexism is laid on thick and heavy in this chapter as Lotus squares off against Gallant Ouyang, a master known for his bevvy of female disciples. Ouyang knew from the moment he laid eyes on Lotus that he had to have this beautiful woman. He challenges her to a test of their kung fu, boasting that he will not need to use his hands to defeat her. He draws a circle on the ground and if either of them leaves the circle, they lose. He swears he will not pursue her if he loses.

Lotus quickly determines that his kung fu is stronger than she can handle, so she resorts to her wits again. (Seriously, she is lilke the quick-talking fae in this story.) She steps out of the circle on her own, noting that if Ouyang steps out, he will also lose, and is then honor-bound to not pursue her.

Before she can make her exit, Lama Supreme Wisdom (the master who tried to poison Iron Foot) blocks her path and moves to strike. She evades the strike and he is injured, his hand torn to ribbons. The masters surmise that she is wearing hedgehog chainmail beneath her robes, a well-known and coveted piece of armor from Peach Blossom Island. Hmmm…

Before the masters can pursue, Wanyan Kang (the jerk) returns and tells his (alleged) father about the abduction of the consort (his mom, Charity Bao).

The action switches back to Guo Jing who is (again) running for his life, pursued by Old Liang, the Ginseng Immortal, who is still pretty salty about losing his precious snake of immortality. Guo Jing falls into a pit that is filled with human skulls (ew!) (and, foreshadowing!). He finds a dark tunnel and with no other choice, runs into the tunnel. Liang gives chase and the two of them meet a master in the dark.

Whoever she is, she’s got mad skills. Even in the dark she takes Old Liang apart while holding Guo Jing captive. Old Liang flees and Guo Jing, ever the numbskull, thanks his savior (poor boy!)

His savior is none other than Cyclone Mei, who (of course) got picked up by Wanyan Honglie’s retinue out in the Mongolian desert, and brought back to his estate to be a maid. Because, I’m sure the prince is always picking up strays like this. In any case, this is how Cyclone Mei ends up living in Wanyan Honglie’s basement.

Mei quickly figures out who Guo Jing is and she’s thrilled. She might also be a little insane. But her chance for vengeance is finally here, delivered to her doorstep. She does have a problem though, in that she’s paralyzed from the waist down, and starving.

We get an extended flashback as Mei’s mind wanders, and we see how she came to be. After her family dies, and her adoptive family sells her off (rough), she ends up as a maid for a wealthy family, where the father is a bit to grabby with the hands. (ew) Just as she is about to be punished by the wife, Apothecary Huang shows up and saves Mei, taking her on as his disciple. He is the master of Peach Blossom Island, and he trains her with his other students (all men).

And can you guess what happens when we throw one beautiful woman into an island of men? As Mei grows into a stunning young woman, she realizes she has caught the attention of not only two of her martial brothers, but also her shifu (again, ew). Mei and Hurricane Chen eventually leave, fracturing the students of Peach Blossom Island.

Apothecary Huang retreats, and then returns with a young wife who is uncannily close to Mei in age and looks. I guess he drew the line only at desiring his student, not at a girl a quarter his age. He also returns with the fabled Nine Yin Manual, but he and his new wife are unable to decipher the manual.

Ok, this idea of the lost martial arts manual is something I’ve seen a lot, and it’s almost always indecipherable. Why? Are they written in code? Did sects that studied their own brand of kung fu also have internal writing systems to prevent their secrets from getting out?

Hurricane Chen convinces Cyclone Mei to steal the manual and flee the island. They manage to only steal the second book, which teaches them some things, but not the foundational neigong (internal kung fu). They spend years in exile, practicing their kung fu techniques on hapless villagers. They are pursued by many martial masters, and they put them all down, until the debacle in Mongolia with the Seven Heroes of the South. Through it all, Mei nurses regret for the way she left Peach Blossom Island and her shifu.

While hiding in Wanyan Honglie’s basement, Cyclone Mei has been secretly teaching Yang Kang her kung fu, including the Nine Yin Skeleton Claw (which, come on, she took years to master, but now she can teach to this cocky kid?). Her current partial paralysis is due to her attempting the neigong that she never got trained it. Her qi is stuck, and she can’t move her legs.

Cyclone realizes that Guo Jing was taught by the very Taoist masters who perfected neigong, therefore he could fix her. She strikes a deal with him. She will help him deliver the needed herbs to Iron Foot if he tells her the secrets of Quanzhen neigong.

As they strike this deal, Lotus comes nearby and Guo Jing hears the voices of her pursuers. He quickly modifies the deal with Cyclone Mei to include safety for Lotus. Cyclone Mei agrees and Lotus reveals herself. They’re still in a sticky situation, and Lotus knows they can’t fight their way out without Cyclone Mei’s help. Lotus has been listening and she knows who Cyclone Mei is, because Lotus is none other than Apothecary Huang’s daughter (oh, that’s where she got the Hedgehog Chainmail!)

Cyclone Mei is gobsmacked to be faced with her shifu’s daughter. Lotus offers Cyclone a chance to atone with her shifu if Cyclone helps them escape Wanyan Honglie’s assembled masters.

Still too many people to keep track of! I keep going back to the dramatis personae in the beginning to make sure I’ve got everyone straight. But this chapter is chock full of the trope-y stuff I love. Secret manuals! Secret identities! Forbidden techniques! I love Cyclone Mei’s back story…it makes her so much more interesting as a character. You could have a whole series of books just about her adventures!

This volume was also translated by a different person. I wonder if those who have read the original Chinese will notice a difference in the translation?