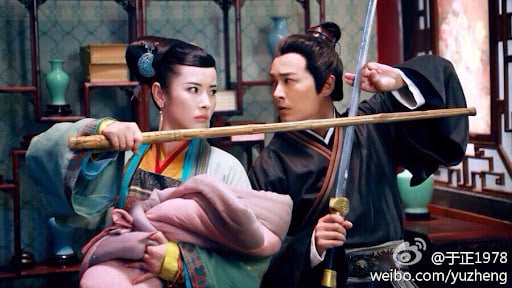 The (not so) thrilling conclusion! Well after a bit of a snoozer of chapter eight, the final chapter of the first book really delivers on the action. Lives are in peril! Secrets are divulged! Identities are revealed! The most spoiler-y of spoilers ahead!

Guo Jing and Lotus have infiltrated the Prince’s palace to find the healing herbs for Iron Foot. Once inside, they overhear guards talking about a beautiful woman whom the prince has detained. Her curiosity piqued (is it though? does she know who she’s looking for?), Lotus drags Guo Jing off to spy on the prisoner.

The prisoners are of course, Mercy and her father.

Lotus throws a rock to extinguish a lamp, so that she and Guo Jing can enter the building without being seen. This leads to one of the funnier lines in the book.

“The guard did not think it too strange; rocks were known to fall sometimes from the roofs.”

I mean, what? Is this hinting at something that I’m missing? Or is it just a complete cop out to explain why the guards whiffed on catching Lotus and Guo Jing?

Guo Jing, poor boy, is still catching up to recent events. He thinks Mercy is here (and a prisoner) because the prince has fallen in love with her. This boy really needs some lessons on life in the big city.

Wanyan Kang offers to marry Mercy in secret, in order to protect his father from the shame of his son marrying someone of such low station (wow, what a guy!). Mu Yi refuses, but Mercy is quietly intrigued by the offer as she is quite taken with the prince (maybe she needs some life lessons as well?).

We find out that Wanyan Kang is a bit of a tool. His servants definitely don’t like him, and mock him behind his back. Lotus and Guo Jing follow him as Kang visits his mother, who lives in a humble cottage built in the center of the palace. Before he goes inside, the prince takes a rabbit and breaks its hind legs. What a jerk. (no animals were harmed in the production of this piece)

The prince’s mother lives in the small cottage, and is dressed in simple garments that do not represent her station as the mother of a prince.

Another hilarious line, as Guo Jing incorrectly connects the dots between the Consort and Lotus dressing below their station. “It must be a game women here liked to play, pretending to be poor.”

In speaking with his mother, the prince reveals that he has no intention of marrying Mercy, and that he is, in fact, a jerk. Guo jing is ready to jump in and smash his face when Lotus, the brains of this operation, calms him down.

Looking around the little cottage, Guo Jing notices a rusty spear and a broken plow hung on the wall. (That’s a Chekov’s gun if I’ve ever seen one!)

Wanyan Kang leans into his jerkiness, giving the rabbit he lamed to his mother, because she is fond of healing wounded animals.

Hmm… who have we met who has unsurpassed beauty, a reputation as a healer, and used to live in a humble house protected by someone who wielded spears? Hmmm…

Lotus pulls Guo Jing away from this scene, probably because the plot needed her to, and they go off in search of the herbs. Lotus goes full John (Jane?) Wick on the next servant they find, forcing him to reveal where the herbs are held. She actually breaks his arm (ow!) so that he has an excuse to ask for the herbs! Wow! The herbs are held by Old Liang, one of the masters visiting Wanyan Honglie.

They find Wanyan Honglie and Old Liang attending a banquet with all of the elder prince’s guests (all the masters from chapter 8–pop quiz on them later). Old Liang sends a servant to his quarters to fetch the herbs. Guo Jing runs off to follow the servant, while Lotus stays behind to listen to the plot develop in the banquet hall.

Wanyan Honglie has a plan to attack the Chinese to the south. He has discovered that the Chinese General Yue Fei wrote a poem in which he had hidden martial strategy and secrets. The prince has discovered the hiding place of more of the general’s poems, and he wants the assembled masters to retrieve the poems, so that they may be decoded, and provide the Jin empire with the strategy to invade the south.

While this is happening, Guo Jing is getting into all kinds of trouble when left to his own devices. After retrieving the herbs, the servant with the broken arm (who clearly feared Lotus more than Guo Jing) turns on him and raises the alarm. Guo Jing finds himself alone in Old Liang’s storeroom, but with no knowledge of what he needs. He fumbles about, desperate to find the herbs for Iron Foot. In his haste, he manages to release a deadly snake into the room with him, while putting out his only candle at the same time. dundunDun!

The servant boy makes it back to the banquet hall and alerts the household. Lotus is discovered in her hiding place. She almost pulls off the I’m-an-innocent-girl-and-therefore-not-a-threat ploy. Entrenched sexism FTW!

Lotus fights back, and demonstrates enough graceful kung fu to immediately intrigue all of the gathered masters. Except for Browbeater Hou. Once he realizes Lotus is the beggar boy who embarrassed him the previous day, he will have nothing but her death. Lotus dances around Hou, using her talents and his sexism to her advantage. The other masters are really only interested in finding out who her master is, since her techniques are so varied. Lotus repeatedly refuses to name her shifu.

Back in the storeroom, Guo Jing is fighting for his life. The snake is nearly crushing him to death and as a last ditch effort, he bites into the snake, hoping to kill it. The poisonous snake’s blood floods into his system. (Hey! Shades of Cradle again!) The snake dies. Guo Jing stumbles out and goes off to free Mercy and Mu Yi.

As he is freeing them, Guo Jing tells Mu Yi his name. Mu Yi is overwhelmed to finally find who he has been looking for, the son of his sworn brother. Yes folks, Mu Yi is none other than Ironheart Yang, living in hiding since surviving his injuries at the hands of the Jin.

Mercy is the daughter of the family who nursed Ironheart back to health. When her family was taken by plague, Ironheart raised her as his own. Together they searched the land, looking for both his wife, Charity, and for Lily’s son. Before Guo Jing can free them, the Consort arrives and frees Mercy and Ironheart. Guo Jing hides but he runs into Wanyan Kang and they fight.
Lotus knows she is outmatched, so she outwits the masters with trickery.

Old Liang finds his dead snake, and despairs. He has been raising the snake for years, and it was finally ready to be harvested for its blood, which would have granted him immortality.

Guo Jing is burning up and manages to hold off Old Liang, then flees to the Consort’s cottage. He hides and watches an exchange between the Consort and Mu Yi, who did not leave the compound. The Consort is revealed to be Ironheart’s wife, Charity, held at the palace all these years because Wanyan Honglie “saved” her from Ox Village.

Wanyan Kang arrives and Ironheart hides. In the same place as Guo Jing! How big is that cabinet?? Kang’s mother tells him everything, that he is not the son of the prince, and that his real name is Yang Kang, he is the son of Ironheart Yang. (violin stinger!)

Her son cannot believe it. Ironheart reveals himself and Kang lunges at him with the rusty spear. Charity blocks and the spear pierces her. Kang is horrified that he may have killed his own mother.

Ironheart grabs Charity and flees the palace with Mercy at his side.

And that’s it. The book ends. Argh! We’re jumping right into book two, A Bond Undone, one chapter per week (that’s all we ask!).
How did you like the first book? Other than some archaic story-telling issues, I’ve been enjoying the story. There’s lots of high drama, which is always fun, and it’s great to see the progenitors of so many kung fu classics. I’m definitely looking forward to seeing where this goes.

Will Guo Jing escape the palace? What happened to Lotus? Will Guo Jing and Lotus get together? What about Kohjin? Will Yang Kang ever not be a dick?