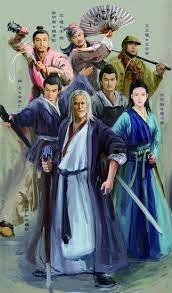 Welcome to the second week of our read-along of the Legend of the Condor Heroes. In this chapter we meet the wuxia equivalent of the superhero team, and get treated to one of the best tropes of kung fu movies, and in fact nearly all adventure stories: the tavern brawl.

Following the apparent deaths of Skyfury and Ironheart, we follow Charity as she flees Ox Village with her new protector. They finally stop in Jiaxing where we find out that Charity’s protector is a Wandering Prince Masquerading As A Lowly Soldier. Her escort is none other than Wanyan Honglie, a Jin prince who has infiltrated the south, looking for a means to invade.

The rest of the chapter serves as a vehicle to introduce the Seven Freaks of the South, a martial arts family (not blood relations), each member with unique abilities and a distinct style of fighting. Basically early versions of the Superfriends. The Seven Freaks defend the honor of the monk Scorched Wood, against the word of Qiu Chuji, the Taoist monk who met and fought Ironheart and Skyfury just days before in Ox Village.

What follows is all the best tropes in every kungfu movie.
– The fight in the tavern that travels from upstairs to downstairs.
– The drunken master.
– The really big guy.
– The nimble ingenue.
– The dude with the deadly fan.
– Ridiculous items turned into impromptu weapons with amazing skill.
– All fighting stops so we can settle a bet.

Wanyan Honglie watches the fight in amazement and realizes that Qiu Chuji is searching for Lily and Charity, and Qiu Chuji is convinced the women are hidden in Scorched Wood’s temple. Unable to overcome the Seven Freaks, Qiu Chuji leaves, vowing to enter the temple and find the women.

A lengthy flashback follows, where we follow Justice Duan as flees Qiu Chuji following the fight in Ox Village. Taking Lily with him, Duan begs for help from his uncle, lying about his circumstances to gain refuge at Scorched Wood’s temple.

The action comes to a head at the temple where the Seven Freaks and Qiu Chuji throw down for all the marbles. A lengthy battle ensues where Chuji manages to hold his own against all Seven yet again. However he cannot maintain it for long and soon falters, even as he manages to injure all of the Seven Freaks.

Only in the end, with all the Seven Freaks and Chuji down and wounded is Justice Duan’s treachery revealed. He grabs Lily and flees the temple.

Argh! Another prologue chapter. But it was so much fun. I was totally reminded of the scene in Crouching Tiger, Hidden Dragon when Jen beats up an entire restaurant of fighters, leaping from floor to floor, knocking men down like bowling pins.

When my mom was explaining the literal translation of wuxia to me, she said it meant someone with martial power/talent, who does good deeds. (Chinese is a really dense language). It struck me that the translation that probably fits best into the western mindset is ‘superhero’. And then I got to meet the Seven Freaks of the South, the original ancient Chinese Avengers/X-Men/Justice League.

As always if you’d like to join us in the current discussion (we just started A Bond Undone), come find us in our Facebook group, Fans of Asian Urban Fantasy.