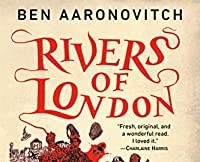 It isn’t often that I will read a series to its conclusion. There is just so much media out there to soak up, not just books, but tv, movies, comics. It’s hard to keep track of everything, and even if I really like something, it’s tough to remember to stay current with it when there is so much out there competing for my attention.

To date, the series that I’ve kept current with and/or completed (as I can remember at the time of this writing). Feel free to judge me as you will, based on the quality of this list.

All this is to say that I know I’m in love with a series if I’m spending the effort to stay with it to the end.

A few years ago, Julia turned me on to the books of Ilona Andrews (specifically the Kate Daniels and Hidden Legacy series.) Now, I’ll be upfront here and admit these books were nowhere near my radar just based on the covers, because their (Ilona Andrews is the penname for a husband and wife writing team) books are primarily marketed as romance (which they are not (mostly)).

Back to the point. I devoured these two series. Kate Daniels was complete when I started, so that was a treat. Hidden Legacy had a complete arc, but when they started a new arc, I made sure to pre-order all of them. Amazing stuff, really. If you’re a big fan of hard UF (like me!) you need to give these a try!

Back to my point. My original point, that is. Have you heard of the Rivers of London series?

Do you like urban fantasy? Do you like police procedurals? How would you like the two of those mixed with a healthy dollop of English culture and history?

The Rivers of London series follows Constable Peter Grant who encounters a ghost during his duties in London. His encounter with the supernatural brings him to the attention of Detective Chief Inspector Thomas Nightingale, the Metropolitan Police’s last formally trained combat magician.

Really, the series is just fantastic. Or, to borrow a more British wording, brilliant. There is plenty of action, the magic system is great, and the writing is sharp and funny. The stories are told exclusively from Grant’s POV and his opinions of everything from interior decoration to automobile operation add a unique flair and humor to the tale.

And this is one of those series where I’ve been exclusively listening to the audiobooks, and the narration is–again–brilliant. Kobna Holdbrook-Smith does an amazing job of handling an expansive cast of characters with a wide array of regional accents.

I just finished Lies Sleeping, the seventh book in the series, and I’m looking forward to finishing out the last two books. If you’re in the market for a new series to crack open, do yourself a favor and hop across the pond for the Rivers of London.