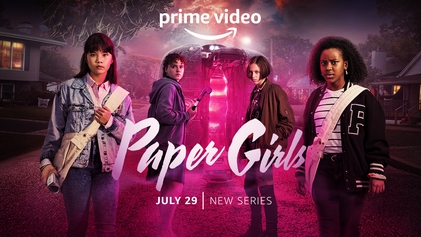 I am three episodes into Paper Girls on Amazon Prime and I. Am. Loving it.

As someone who grew up right through the rip roaring 80s, this show hits all my buttons. Latch key kids, riding around on their bikes getting into all kinds of trouble, this isn’t just my jam, this was actually my life (kinda). Add the fact that one of the four girls, Erin Tieng, is a second generation Chinese, and that just makes the show hit even harder.

If you don’t know, the show is based on a stellar run of comic books written by Brian K. Vaughn (also known for Y: the Last Man) with art by Cliff Chiang. If you haven’t read it, do yourself a favor. They’ve even packaged the whole run into one convenient collection!

Without being too spoilery, I can safely say that the story line is quirky and involves time travel. The four titular paper girls get zapped ahead a couple of decades and have to find a way home. While dodging the rival factions of a time war they’ve inadvertently found themselves in the middle of.

My favorite moment by far from the Amazon adaptation comes in the second episode, where Erin berates her nearly 30 year older self for the (seemingly terrible) life choices that she’s made. It’s an amazing scene. And I know it struck a nerve with me due to my Chinese heritage, but I hope it hits home for you, too.

(btw, amazing casting choices. Ali Wong as older Erin, and Riley Lai Nelet as younger Erin are fricking amazing and play off each other so well.)

I just read that the show was not picked up for a second season, and the writers are shopping it around. Hopefully they’ll find a new home, but given how odd ball the comic was, I can totally see how this might not have caught on. Regardless I will finish season one and enjoy what I have, and keep my fingers crossed for season two!