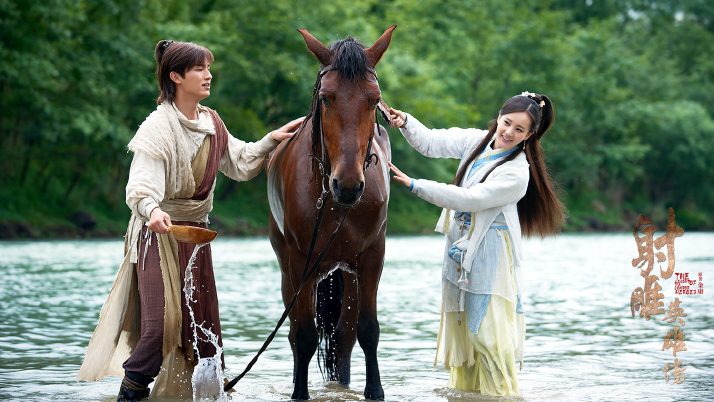 Or, The Grand Conclusion
And, Lessons Finally Learned
And, Let’s Tie Up All the Loose Threads, Eh?

Viper Ouyang has arrived and the contest at Mount Hua is now truly underway. Who will prevail?

Viper and Count Seven square off, vowing to fight to the death. Which is odd, considering how many times Viper actually tried to kill the Beggar master before, while Count Seven spared Viper’s life several times.

The fight is intense, with neither man giving an inch of ground. Lotus and Guo Jing are worried, since their shifu spent the last two years (really? I didn’t think that much time had passed in this book) recovering his neigong and repairing his meridians.  In that time, Viper has been free to train and improve his kung fu.

The fight is so close, but Lotus and Guo Jing are loathe to interfere physically. Lotus does the next best thing and starts trash talking Viper, calling out all the times he’s acted against the prinicples of xia, all the times he’s been dishonorable and a cheat. This works, rattling Viper and  breaking his concentration. Count Seven is able to land a blow to Viper’s head, nearly knocking him unconscious. Completely addled, Viper runs away.

Here comes the next fighter!

Lord Huang and Count Seven are civil and agree to fight for honor, instead of to the death. Lord Huang even offers to wait until noon to fight, so that Count Seven can regain his energy.

(Why does everything need to happen today? What’s so special about this day, other than that they’ve picked it?)

Lotus has a better idea, one that involves her boyfriend. She proposes that her father duel Guo Jing first, letting Count Seven rest. Then Count Seven will duel Guo Jing afterwards. Which ever man can subdue Guo Jing in the fewest moves will be declared the winner, with the maximum number being 300 moves.

They like this idea, so Lord Huang launches into Guo Jing, carefully at first, to test his strength, and then going all out on him. Our plucky boy is doing everything he can to stay ahead of his esrtwhile father-in-law, and manages to keep himself from getting crushed.

In the span of a subjective eon, Lord Huang has reached 300 moves and he backs off, clearly upset that he was not able to break through Guo Jing’s defenses. He is, however, impressed with Guo Jing’s skill and improvement since they last met.

Count Seven also reaches 300 moves without defeating Guo Jing and he withdraws, happy to see how much his student has achieved.

Viper returns! And oh boy, if you thought this guy was cray-cray before, this tops all of it!

The Venom has gone completely off the deep end. He took Lotus’ words to heart, her purposely screwed up version of the Nine Yin manual, and managed to reverse all his qi flows, driving himself crazy and fighting in patterns that defy logic.

He’s bashing himself in the head. He calls Lord Huang as King Duan. He mistakes Guo Jing as Gallant Ouyang.

One by one, Lord Huang, Count Seven, and Guo Jing try to subdue the enraged Viper, and one by one they step back, unable to counter his unorthodox moves. Even though he cannot be defeated, they realize that Viper is also not the man he used to be.

Lotus has a revelation about the nature of Viper’s insanity. He doesn’t think that he’s Viper. She tells him that his last opponent is Viper Ouyang, who is behind him. The only thing behind him is his shadow, cast upon a rock face. Viper attacks the shadow. Of course the shadow mirrors his every move and Viper smashes his fists and feet against the rock. Unable to defeat his shadow Viper flees in terror.

(I’m a little confused since it’s not explicitly laid out in the text. Who does Viper think he is? Does he think he’s Lord Huang since he addressed Lotus as “daughter?”)

Lotus, Guo Jing, Lord Huang, and Count Seven descend from Mount Hua. Lotus cooks a fine meal for everyone. They agree that no one deserves the title of Greatest Martial Master Under the Heavens.

Really? After four books of everyone posturing and preening about how they were the one who was going to win, and how much they went through to see that result, this is it? Everyone walks off into the sunset, laughing and patting each other on the back? Good show! Nobody wins!

Count Seven takes off in the middle of the night, leaving a short goodbye note for his students.  On brand.

After travelling for some time Guo Jing’s condors find him. The condors are carrying a note from Khojin. She reports that the Mongolians are still advancing on the Song empire, but she is no longer with her father. She feels guilty for Guo Jing’s mother’s death, and so she is going into exile in the west.

A few days later Lotus and Guo Jing run into Mercy Mu. She’s held hostage by one of the exiles from the Beggar clan. And, surprise! She has a baby!

Yes, one night with Yang Kang was all she needed to get pregnant. *sigh*

They free her and hear her story. After everything that happened, she just wanted to go back to Ox Village. So she walked across China. Pregnant. And then gave birth by herself in a hut. And then lived by hunting and foraging off the land, keeping herself and her newborn son alive and healthy.

I mean, I can suspend disbelief for kung fu artists flying across the field, but this is a bridge too far.

Mercy asks Guo Jing to name her son. Guo Jing defers to Lotus (smart) and she names him Penance Amend.

(What is the boy’s name in the Chinese text?)

Guo Jing offers to take the boy in as his student and have Mercy and her son live with them on Peach Blossom Island. Wow, not even married yet and already inviting strays to live at the in-law’s!

Mercy defers for now but says that one day she will send her son to present himself to his shifu and shimu. (Foreshadowing!)

Lotus and Guo Jing continue on. Guo Jing finally figures out that somehow Khojin must have seen him opening the Khan’s silk-sealed letter and snitched on them, in an attempt to keep Guo Jing from leaving.  (Yeah, I was wondering about that, too.)

As they travel further into China, they hear stories of the Chinese rising up against both the Jin and the Mongolians. In particular they hear about Li Quan and his wife, Yang Miaozhen, who have been named leaders of the Patriotic Army, which sounds like a grassroots army that sometimes fights alongside the Song, while not necessarily getting along with them.

I feel like there’s a lot of history I’m missing here.

Lotus and Guo Jing decide to go to Qingzhou and meet with Li Quan and Yang Miaozhen and offer their help in repelling the Jin and the Mongolians. Upon arriving though, they find that the leaders they’ve heard of are not the leaders they were expecting.

Soon, they receive news that the Mongolians are approaching. Li Quan orders the city to be sealed, locking out thousands of Chinese who are now trapped between the advancing army and the city walls.

Guo Jing takes over, knocking out the ranking officer and ordering the city gates to be opened. The citizens pour into the city. Guo Jing declares himself to be their new leader, sent by Imperial mandate. This works. Of course, this is Lotus’ idea.

Everyone rallies around Guo Jing, but he knows he doesn’t have enough men to effectively fight the incoming army. He deploys his men in two groups behind two hills and goes out to meet the Mongolians.

It turns out the Mongolian army is led by Tolui, and the two brothers meet again. Tolui is cautious, knowing Guo Jing to be a cunning strategist. At a signal, the men behind the hills chant and scream, waving their banners. This makes Tolui think that his army is surrounded, and he retreats for the day.

That night Lotus and Guo Jing realize that they can’t keep tricking Tolui, and the only way to prevent a costly seige of the city is to assassinate Tolui. They sneak into the camp that night but their attempt is aborted when messengers arrive. They have a message from Genghis Khan. His health is failing and he is calling his son back to him, and asking him to bring Guo Jing with him if possible. All their old grievances are gone.

Guo Jing bursts into Tolui’s tent after hearing the message and says he will go to Mongolia with Tolui.

Well, that was a convenient and fortunate turn of events, wasn’t it?

Back in Mongolia Guo Jing meets with Genghis Khan for the last time. Guo Jing is older and wiser now, and he counsels the dying king on whether it is better to be remembered for being a good and just king, or remembered for your bloody conquests.

The Khan dies later that night. Lotus and Guo Jing pay their respects and leave.