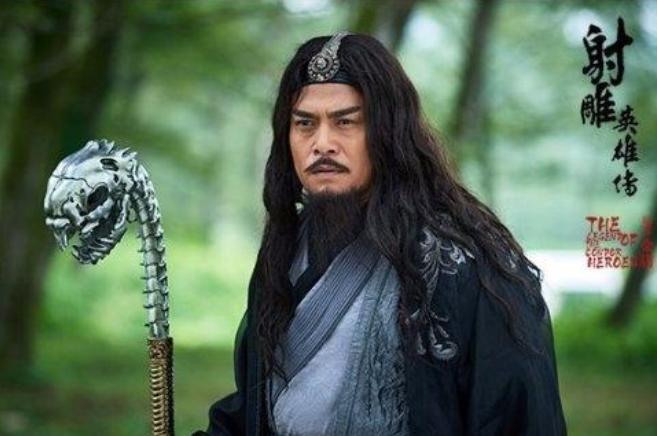 Or, Guo Jing Can’t Catch a Break
And, Doing The Right Thing is Rarely Easy
Also, When are the Women Going to Get a Little Justice?

Guo Jing has squandered his good will with the Khan. Instead of asking to be released from his betrothal, he asked the Khan to spare the people of Samarkand. Any guesses on what Lotus’ reaction is going to be?

In fact, Lotus is prepared, but for the wrong contingency. She is waiting outside with a large force of beggars, ready to fight to save Guo Jing from the Khan’s wrath. Instead, Guo Jing tells her that he, in fact, did not ask to be released from Khojin. Before he can explain, Khojin arrives (unfortunate!) and Lotus does what she does and peaces out.

In fact, Lotus is prepared, but for the wrong contingency. She is waiting outside with a large force of beggars, ready to fight to save Guo Jing from the Khan’s wrath. Instead, Guo Jing tells her that he, in fact, did not ask to be released from Khojin. Before he can explain, Khojin arrives (unfortunate!) and Lotus does what she does and peaces out.

By the time Guo Jing can track her down, he discovers that she’s gone, and she’s taken the painting from his tent. Ouch. That’s a pretty strong message.

Guo Jing mounts Ulaan, his trusty steed, and rides off into the desert to find Lotus. He finds her tracks quickly, but then discovers that she is being pursued by Viper. He pushes Ulaan to the limit to try to catch up to them.

He tracks the two of them to a boggy marsh, but Lotus is nowhere to be found. He does find the sable coat that he gave her when they first met. Viper manages to get caught in the bog and nearly drowns before Guo Jing’s good nature kicks in and he saves him.

Guo Jing searches for a little longer, dragging Viper behind him. (ha!) Still, he finds no trace of Lotus. Despondent, he lowers his guard and Viper disables Guo Jing with an acupressure point attack. However, Viper has decided not to kill him because he wants to make Guo Jing suffer, and because he thinks Guo Jing knows some of the secrets of the Nine Yin Manual.

Viper takes Guo Jing to a village that has been destroyed by the Mongol forces. They make camp there and for a month, Viper holds Guo Jing hostage, fighting him every day in order to glean some of the manual. Guo Jing studies the manual in his head, never saying anything aloud, and manages to level up his skills in secret. Still, he is no match for Viper Ouyang and his Exploding Toad kung fu.

One night, two men run into the abandoned house that Viper has claimed, one chasing the other. Viper and Guo Jing hide, aware of the obvious kung fu skills displayed by both men. The two men are Qiu Qianren (the real one), being chased by Zhou Botong. The Hoary Urchin is trying to kill Qiu Qianren at Lotus’ request. His kung fu is actually stronger than Qiu Qianren’s but their chase has gone on for so long, he’s actually having a really fun time of it.

Inside the house, everything is pitch black. Mongol riders arrive outside, chasing down Khwwarazmian forces. Now the men in the house can’t see anything, and can’t hear anything for all the noise of fighting outside.

What follows is a confusing, four-sided fight in the dark where each man can only tell what is going on by reading the patterns of airflow around them. Everyone recognizes each other from their style of kung fu, and no one can communicate except by trading techniques. One of those instances where the passage in the book is likely impossible to translate to film. Has anyone seen an adaptation where this scene was recreated?

Eventually someone busts a hole in the roof, letting light in. Hoary Urchin throws a fit now that everyone can see. Guo Jing, exhausted from holding his own against three martial masters, leaps through the hole and away from them. He collapses outside and falls asleep.

Guo Jing wakes up to Ulaan. All the soldiers are gone, as are Viper, Hoary Urchin, and Qiu Qianren. With nowhere else to go, Guo Jing returns to Genghis Khan’s camp.

There, the Khan is preparing for the final assault on the Jin empire. He holds a battle conference with his generals, Guo Jing included. The Khan gives sealed orders to Tolui, Ogedai, and Guo Jing, wrapped in silk and sealed with wax. The orders are only to be opened when the Mongols have taken the Jin’s southern capital.

Guo Jing meets with his mother. He’s already told Khojin that he believes Lotus to be dead. Because she is dead he will not marry Khojin.

But his mother is more concerned about other things. She thinks the Khan may be planning something. When she learns of the sealed orders, she uses her skill with needle and thread to unweave the silk, thereby opening the package without breaking the Khan’s seal.

The orders instruct the three men, after the fall of the Jin, to move on the Song empire and subdue them as well. If Guo Jing fails to follow these orders, Tolui and Ogedai are ordered to kill him.

Guo Jing may have been raised with the Mongols, but his mother instilled in him his love for China. He cannot carry out these orders. He and his mother make plans to leave immediately.

But by the time he’s ready to go, the Khan has already moved and taken Lily hostage. He gives Guo Jing one more chance to recant. Lily asks to speak to her son, and the Khan agrees, sensing that Guo Jing’s mother will speak some sense into him.

(I guess the Khan doesn’t watch very many C-dramas, does he?)

Lily tells her son to do what he feels is right. Then she uses a knife to cut his bonds and then plunges the knife into her own heart! WTF is with the women having to fall on their knives to effect the men’s escapes?

Guo Jing flees, clutching the dead body of his mother. (See? Wouldn’t their escape have been easier if she could, y’know, run?) He finds a horse and flees into the night.

The next day he spots a plume of dust approaching him. The rider shoots an arrow at him, but the head has been taken off the arrow. Guo Jing knows that Jebe shot the arrow and he waits for his arrival. Before they return to camp, Guo Jing asks to bury his mother.

After his mother is buried, Jebe tells Guo Jing that he’s letting him go. Guo Jing has done too much for Jebe. Tolui then rides up and he too, is here to make sure that Guo Jing gets away. He has brought Ulaan, along with a bag of gold for Guo Jing.

Guo Jing takes his horse and the gold and rides off into the desert.