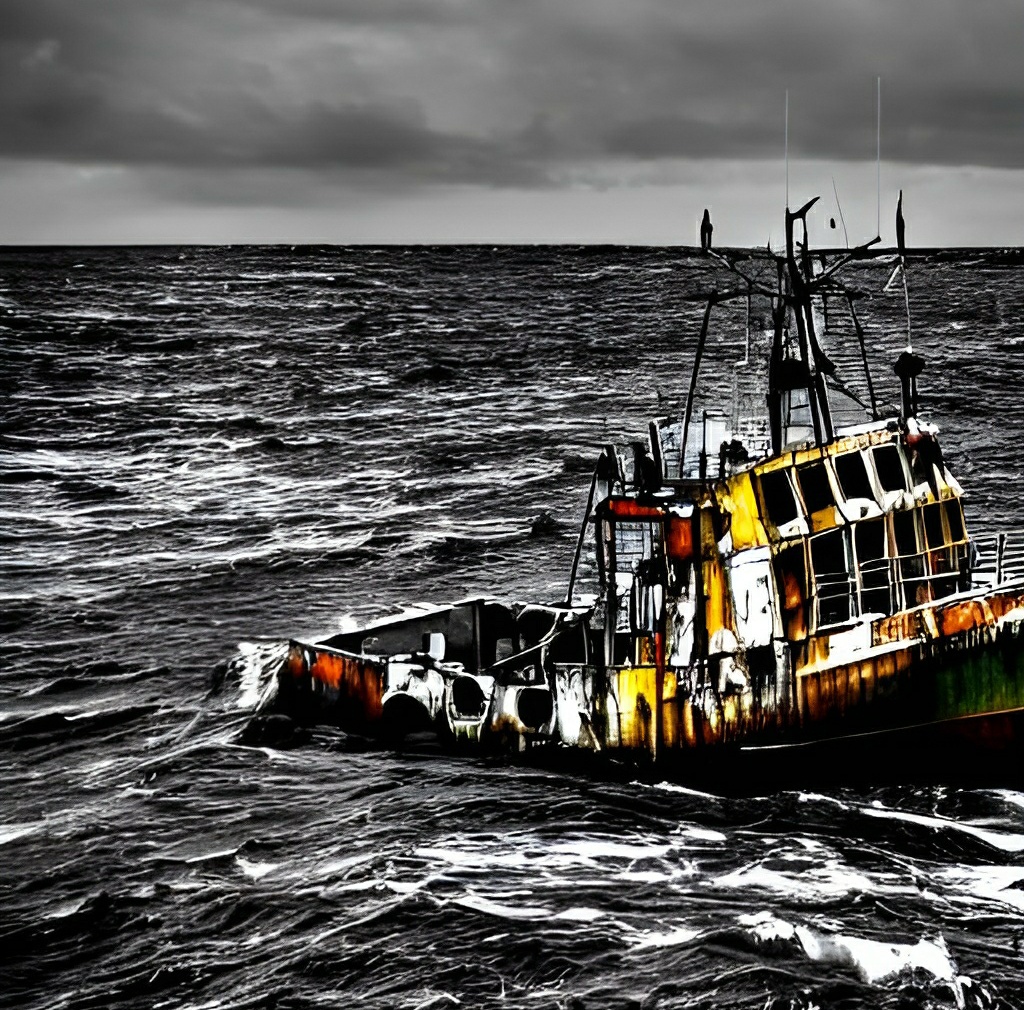 I’m still doing NYCM short fiction contests. It’s great exercise, forcing me to craft a story that I can bring to a satisfying conclusion within a limited word count. Honestly, the appeal is the finishing, knowing that I’ve created something complete. I’ve already signed up for the next micro-fiction contest (250 words). That one starts in November and is still open for sign-ups. Click here if you want to give it a try!

For the latest round in the flash fiction contest, I was given science fiction (genre), a trawler (setting), and pigtails (object). Enjoy!

On a dying world, a scavenger finds an unexpected treasure.

Henry had found many strange treasures in his years scavenging the clogged wastes of the Pacific Ocean, but the baby was the oddest.

He first heard the plaintive cries and thought it was a bird. The prospect of finding an actual bird brought him running to the deck of his trawler, the Orca. Dark clouds, heavy with industrial waste, stretched to the horizon. The cry came again, from below, amidst the unbroken skin of undulating junk crusted over the remains of the Pacific.

The third cry broke Henry out of his shock and he went over the railing. Next to the prow, nestled in a spray of yellow plastic, was a tiny baby girl. Henry’s heart stopped, his world tunneling down to the child cradled within a blooming flower of garbage.

The babe rolled into his hand. She was small enough to fit in his palm, her chubby legs dangling alongside his wrist. Her skin was soft and smooth, and when she opened her eyes they were the bright, vivid blue he imagined the sky used to be. He tucked her inside his shirt and clambered back onto the Orca.

He named her Dawn.

Raising a baby on a scavenger boat was not ideal, but Henry was resourceful. He crushed his calorie bars into a fine paste and mixed the paste with water. He’d never had milk before, but it probably looked something like what he’d made. He dribbled it into Dawn’s mouth and she greedily lapped it up. When she started to eat faster, he put the milk in a bag and poked a hole in the bottom. She suckled until she was full.

When Dawn was old enough to walk, Henry found and cleaned clothes for her. It was called the Junk Pile, but a lot of it was still useful. Finding valuable junk would pay for his transit to the outer colonies, and a new life. The clothes weren’t valuable, but Dawn loved them. He tied her hair into pigtails and chased her around the deck, delighting in her squeals of laughter.

Henry happened on another scavenger, also squeezing some final value out of the system’s garbage dump. The man stared at Dawn with a wild gleam in his eye and Henry was forced to pull out the antique pistol he’d repaired so many years ago. The man left, and Henry resolved to avoid the others from then on.

Dawn proved as adept as her father. Bits of old tech became her toys, and then her projects. Human wreckage or alien junk, Dawn broke them all down and rebuilt them. The Orca slowly transformed under her guidance. Whenever Henry returned from the Junk Pile, he found Dawn bolting another of her projects onto the ship.

He stood behind her as she leaned on the wrench, and ran his rough fingers through her dark, silky hair.

She turned and looked up at him, a gap-toothed smile. A spray of freckles decorated her cheeks, accenting the clear blue of her eyes. “It fixes it!”

He never asked what they were supposed to fix. Dawn’s projects sprouted off every surface of the Orca, the decking, the rail, the gantry. The bridge was unrecognizable, the outer walls covered in random bits of tech.

His scavenging should have been enough by now but earning for two took a lot longer.

Henry didn’t care. She was happy, which made him happy.

There were fewer new projects as Dawn grew older. Books hung from every perch on the Orca, drying in the sun. Henry searched for pens and pencils for his daughter. While he slept, Dawn wrote arcane formulas on dried paper and listened to the wet, labored sounds of her father’s breathing.

Henry had no illusions. Soon, Dawn would slide his lifeless body off the deck and watch him disappear under the Junk Pile. He used to dream of finding treasure and traveling to new worlds. Now, as he looked up to the bridge, where Dawn steered the Orca, he despaired at the glow of life about her, the wasted potential, living as a scavenger on this damned rock. If only he could find something that would change her life.

We’re nearly there, all the calculations are done. Dad’s weaker today, but I think we’ll make it.

I climb down from the bridge and join him at the railing. His back is straight and he stands strong, but I can feel the effort it takes to breathe.

He coughs, an ugly sound. “Where are we, Dawn? Will we find treasures here?”

I put my hand on his shoulder and turn him a little. “Do you recognize this place?”

His eyes narrow and he shakes his head. “Looks like more junk to me.”

He sucks in a breath and my heart aches. Tears sting the backs of my eyes.

“Would you do it again, dad? Would you save me?”

Dad cups his hand to my cheek. I lean in and savor the warmth of his skin against my face.

“Anything for you, Dawn. Anything.”

His arms wrap around me. “You’ll always have me.”

The Orca comes to life, all the human and alien tech we’ve found over the years, rebuilt for this day. Dad’s eyes widen as all my projects light up in glowing shades of blue and green.

“Dawn, it’s beautiful. What does it do?”

“It fixes it, dad. It fixes everything.”

The light builds to blinding. The ocean churns as a pillar of cleansing fire bursts from beneath us and pierces the sky. The fire is clean, hot, and pure, and there is no pain as it opens the clouds, showing us a circle of crystal blue sky.