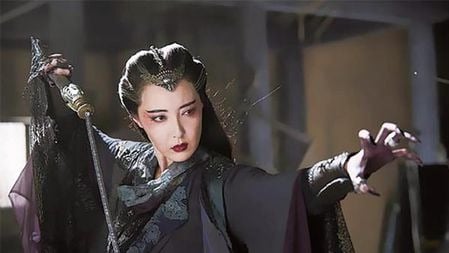 This chapter is split into two distinct halves. The first half deals with Guo Jing navigating his boyhood in Khan Temujin’s domain. The latter half involves the Seven Freaks of the South finally catching up to Guo Jing.

In the first half, the Jin envoys continue to treat with Khan Temujin, as well as Ong Khan, who is a leader of a rival tribe of Mongols. Ong Khan’s and Temujin’s fathers are sworn brothers. There’s a lot of drinking and eating and we meet Ong Khan’s son, Senggum, who is, quite frankly, a little shit. He’s nothing like the other Mongol warriors, but he will inherit his father’s tribe due by birthright.

Guo Jing, who has declared himself a sworn brother to Tolui, one of Temujin’s sons, runs afoul of Senggum, who torments Guo Jing and Tolui. As Senggum is bullying the two boys, they are happened upon by the Seven Freaks, who are searching for Guo Jing and his mother.

The Seven Freaks figure out who Guo Jing is and offer to train him to avenge his father’s death, inviting him to meet them at the top of a nearby mountain at midnight.

Later that night, the Seven Freaks are waiting on the mountain and despairing, feeling the boy is not bright enough, and not brave enough to come to them. In the darkness they stumble upon Copper and Iron Corpse, also known as Twice Foul Dark Wind, masters of a technique known as Nine Yin Skeleton Claw.

Iron Corpse finds them first and the Seven Freaks are hard pressed to contain her. Flying Bat manages to blind and poison Iron Corpse just as her husband, Copper Corpse arrives. The battle rages on, ranging over the mountain top as a furious thunderstorm blankets the mountain in rain and lightning.

Amidst all the chaos, Guo Jing arrives and gets taken hostage by Copper Corpse. Copper Corpse beats the remaining fighters back but is taken surprise by his hostage. Guo Jing pulls his knife and plunges it into Copper Corpse’s belly, dealing a fatal blow.

Iron Corpse, blinded and poisoned, flees. Zhang Asheng, the Laughing Buddha, dies, but not before professing his love for Jade Han. She professes her love for him as well. Guo Jing agrees to study martial arts under the Seven Freaks.
.
.
.
.
Lots of action this week, and yet more and more characters to keep track of! I find myself scrolling back to the front of the book quite a bit to keep everyone straight as they’re introduced.

In looking for the picture for today’s post (I believe that is Iron Corpse from one of the many adaptations) I found an interesting article reviewing this translation from the perspective of another translator! I’ll put the link in the comments. One of the more interesting tidbits was a complaint about some of the translation being too literal, ie Twice Foul Dark Wind.

In another quibble about translation, there is a bit where it’s noted that Lily Li never knew her husband’s (Skyfury Guo) name, referring to him only as ‘brother’ out of respect. So, I’m definitely an ABC banana, so I don’t have context for this. But I’m assuming this is a bad translation into English? I get that there was probably an archaic honorific used between wives and husbands, but literally, “brother”?